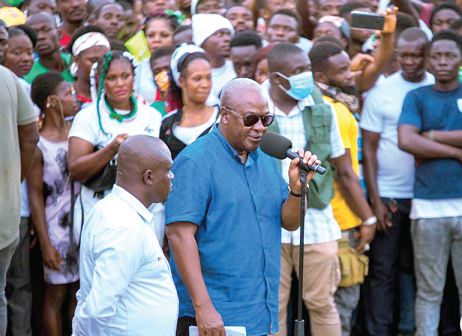 The presidential candidate of the National Democratic Congress (NDC), former President John Dramani Mahama, says he will pay all the affected customers of the defunct gold dealership company, Menzgold Ghana Ltd, their locked-up investments when the party wins this year’s elections on December 7.

He also promised to go after the managers and directors of the company in order to retrieve the monies they collected from the customers.

Mr Mahama, who was addressing a rally at Tarkwa in the Western Region last Tuesday, expressed disappointment in the government’s handling of the Menzgold issue.

He said he was surprised that in spite of the government being aware that the managers and directors of the Menzgold company had done nothing to retrieve the monies, the police only beat up customers who went on demonstration.

Mr Mahama, prior to mounting the rally platform to make his proclamations, had met with some members and leaders of the defunct Menzgold in Tarkwa where they (customers) discussed their challenges with him.

The Securities and Exchange Commission (SEC), on September 12, 2018, directed Menzgold Ghana Limited to shut down its investment operations with immediate effect for contravening the Securities Industry Act, 2016 (Act 929).

The SEC order also warned Menzgold to halt advertising its investment business and desist from creating new contracts with depositors.

According to a letter addressed to the Menzgold CEO, Nana Appiah Mensah, investigations conducted by the regulator found that Menzgold's business, which involved the purchase/deposit of gold by the public and contracts issued with guaranteed returns with clients, was a capital market activity which could not be conducted without a valid licence issued by the SEC.

The letter, dated September 7, and signed by Paul Ababio, the Deputy Director-General of the SEC, warned that the failure of Menzgold to comply with the directive would lead to the SEC employing other relevant measures under the law to enforce compliance.

Two years on, the company has failed to fully pay its numerous aggrieved customers the value on their gold deposits as well as their entire investments.