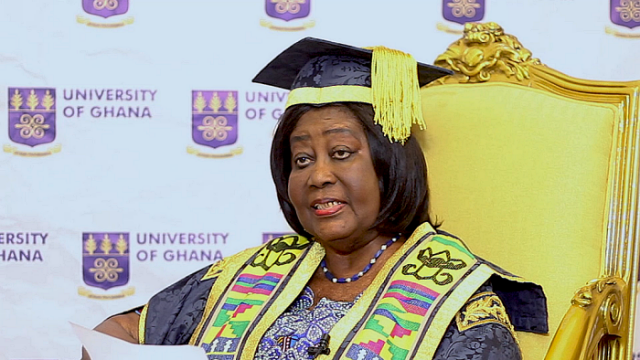 The Chancellor of the University of Ghana, Legon, Mrs. Mary Chinery-Hesse has called on the country’s political parties to consider giving quotas to women for top positions in governance and politics to promote more women in positions of authority.

She explained that the situation that prevailed currently where women have to contest top positions with men, made them go through difficulties including personal attacks.

“This, therefore, tends to discourage some of them resulting in the current situation where we do not have enough women presenting themselves to contest for top positions.

“In Ghana, there are women who put themselves up to compete to go to Parliament. Talk to them and you will hear what they go through is terrible. The sought of comments that is made about them, it is not every woman who has the stomach for it and that is why we don’t have enough of them in top positions and in parliament. If you have a quota system, it will help to overcome this particular problem. The political parties should have what is called Women’s ticket so that the women would compete among themselves for positions,” she explained.

Appointment should be based on skills and competence
Mrs. Chinery-Hesse, who made the call as part of this year’s International Women’s Day, which falls on today, March 8, however said the appointment of women to top governance and political positions should be based on skills and competence to discharge their responsibilities adding that, in parliament for instance, the women that would be elected to contest the positions under the quota system should be those that have the same caliber as the men.

“Ghanaian women are very proud and hardworking and I think they can compete with the men. We should try the quota system. It is not bad,” she said.

Mrs. Chinery-Hesse, who has worked with the United Nations (UN) for years rising to become the first woman Resident Coordinator of the UN Systems and a Deputy Director General of the International Labour Organisation (ILO) pointed out that some countries in East Africa namely Tanzania, Uganda and Rwanda have experimented with quotas for women, especially within the political sphere, and it helped.

In Rwanda for instance, she said because of the quotas they now have more women in Parliament than men and that had gained so much attraction that it was no longer news or a surprise.

She said if more Ghanaian women were to prove that they could do it on the same terms as the men, the more accepted they would become for which reason when they got a particular position, it would not be news.

Progress made on women’s empowerment
Touching on the country’s progress made in mooting for women’s empowerment, Mrs. Chinery-Hesse, who was the first female Chief Director of the Ministry of Finance and Development and in the Ghana Home Service, said even though the world was now better for women with any of them working, have confidence and making sure they were not harassed, there were still a lot of work to be done.

Call to action
On how to get more women into top positions, she suggested that every woman should have a means of getting her own income in order that they could contribute to the family and themselves.

Additionally, she said society should create jobs for women, make sure the work place was a happy place for them and that it would be a place that could improve their lives and that of their families.

She called on society to send the girl-child to school, help them to have higher education like the men and at the point of employment, women should have the same equal opportunity as the men to get the work.

What is International Women’s Day
International Women's Day is a global day celebrating the social, economic, cultural and political achievements of women. This year’s celebration is under the theme: “Gender equality today for a sustainable tomorrow”.