Kpegah accuse CJ, Bar and Legal Council of conspiring against him

“Let me also caution those in the Judicial set up who have resorted to using acts of intimidation such as transfer out of Accra and promotion to cow Judges into deciding cases in their favour. At the premises of the courts there is an inscription that ‘JUSTICE IS NOT FOR SALE’, however what obtains in our Justice system today is that ‘JUSTICE IS FOR SALE’ to the highest bidder,” he said.

In a press statement issued in Accra Tuesday, Justice Kpegah said tradition over the years had been to place the Judiciary above criticism and thus allow some unscrupulous rogues to sell Justice like tomatoes in the market.

However, he warned that “If anybody attempts to rubbish these claims I will expose things that will shock the Ghanaian public to the very marrow”.


“It is becoming apparent that the General Legal Council, the Judiciary and the Ghana Bar Association are hell bent on defending NANA AKUFO-ADDO in the suit I instituted against him at the Fast Track Division of the High Court.

“The General Legal Council is obviously not willing to expose the Defendant, Nana Akufo-Addo as not being on the Roll of Lawyers. This is because it will strike at the very heart of the integrity of the Council. To this end, the Council is ready to sacrifice principle and the very ethics which underpin the Legal Profession for the sake of NANA AKUFO-ADDO. The Legal fraternity is fast losing its long cherished tag of being a ‘noble’ profession,” he said.

Justice Kpegah said the action instituted by him was not out of malice or personal dislike for the Defendant, NANA AKUFO-ADDO and that the action was borne out of a genuine desire to act as one of the very few surviving gate keepers of the legal fraternity.

“For the record, the defendant, Nana Akufo-Addo NEVER filed a defence to my statement of claim. He simply had no defence to the fact that he was never duly called to the Ghana Bar. He however, filed an application to strike out the action as frivolous, vexatious, an abuse of the process and disclosing no reasonable cause of action”.

That application however, he said, was misconceived in law and the presiding Judge got it entirely wrong in her ruling that the writ did not disclose a reasonable cause of action since it failed to establish that NANA AKUFO-ADDO was impersonating W.A.D akufo-Addo who is number 1190 on the Roll of Lawyers in Ghana.

Justice Kpegah said with the utmost respect to the trial Judge, that issue should have been reserved for trial, where the burden of proof would had been on him, the plaintiff to prove.

He accused Her Ladyship the Chief Justice, Georgina Theodora Wood of being neck deep in the dismissal of his case by the Fast Track High Court.

“My information however, is that Her Ladyship the Chief Justice, Georgina Theodora Wood is neck deep in the dismissal of my case by the Fast Track High Court. She personally instructed that my case against Nana Akufo-Addo be dismissed,” he said. 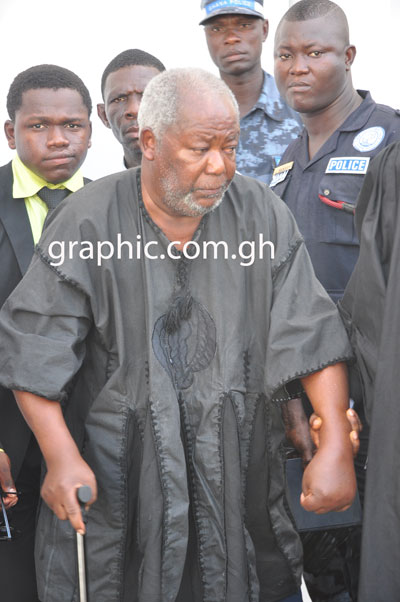 Justice Kpegah said he had known the presiding Judge, Justice Mrs Cecilia Sowah as a fair and firm Judge but a day before the dismissal of his case by Justice Sowah, Lawyer Ebow Dawson “a loud mouth New Patriotic Party member was openly boasting in a cape coast drinking spot that my case against Nana Addo Dankwa Akufo-Addo would be dismissed”.

“He stated emphatically, that ‘they’ had pre-arranged with Her Ladyship the Chief Justice, Georgina Theodora Wood to put Justice Mrs Cecilia Sowah on my case so they can expose her relationship with the Vice President, Amissah Arthur. It is an open secret that the presiding Judge, Justice Mrs Cecilia Sowah is a sibling of His Excellency the Vice President. The Chief Justice, Her Ladyship Georgina Theodora Wood thus colluded with the Defendant, Nana Addo Dankwa Akufo-Addo and his agents  in order to set up this innocent Judge and thereby create  the impression that the  ruling government is behind this suit,” he alleged.

He said the plan was that, the party youth would embark on a violent demonstration against the government and the case would subsequently be made to die a natural death.

“Besides, the Chief Justice is well aware of the good relationship I have always had with Justice Mrs Cecilia Sowah and therefore she deliberately put her on my case as a potential set up. This set up was staged so that should the ruling go my way, the paid agents and assigns of the Defendant, Nana Addo Dankwa Akufo-Addo will then go on a wild media propaganda that I was very close to this Honourable Judge during my days as a Judge in Cape Coast. They had also lined up a number of paid agents and assigns as witnesses to come and testify to it”.

The former Supreme Court judge said he was glad the grand scheme against him, the government and the presiding Judge by the Chief Justice, Her Ladyship Georgina Theodora Wood had failed miserably.

Justice Kpegah said the attempt by the Defendant, Nana Addo Dankwa Akufo-Addo to prove that he was duly called to the Ghana Bar using the mass media would never wash with him, adding that he must file a defence to his action to show in law that he was indeed properly called to the Bar in Ghana.

“The Application by the Defendant to strike out my action is an interlocutory matter and does not deal with the merits of my case. I have therefore instructed my lawyer to file a fresh writ against the Defendant, Nana Addo Dankwa Akufo-AddO.

“Even though, I reserve the unfettered right to Appeal against the ruling of the Fast Track High Court in dismissing my action, I am verily informed and verily believe same to be true that there is a giant scheme in place to frustrate the appeal process,” he said.

He said he was ashamed to hear Lawyer Godfred Dame said on air that the matter had been finally determined and that was the end of the case, saying that “Clearly, he does not know the difference between an interlocutory ruling and a final Judgment”.

Justice Kpegah said the attempt by the Statesman and the Daily Guide newspapers to misrepresent a photograph of NANA AKUFO-ADDO with a group of other lawyers as his year group was indeed laughable and clearly showed the extent to which those pro New Patriotic Party  Newspapers would go to defend their ‘darling boy’.

“To further make it more bizarre, one of the lawyers in the picture was identified as Lawyer Tsatsu Tsikata. This is a blatant lie because the identified person is in fact Lawyer Nutifafa Kuenyehia. Why is NANA ADDO DANKWA AKUFO-ADDO resorting to lies and deceit in the media if he has nothing to hide? It is clear that NANA ADDO DANKWA AKUFO-ADDO knows he was never duly called to the Ghana Bar and is using the media to kill the case before it goes to trial”.

For the record, he said, the photograph was never the class of 1975 as portrayed by those two newspapers who had obviously been engaged in gutter journalism and had thrown all ethics in Journalism to the dogs.

Justice Kpegah said the said photograph was taken after a meeting of the members of the General Legal Council at the time, stating that “I can never win my case on the media but I will definitely win my case in the law courts”. 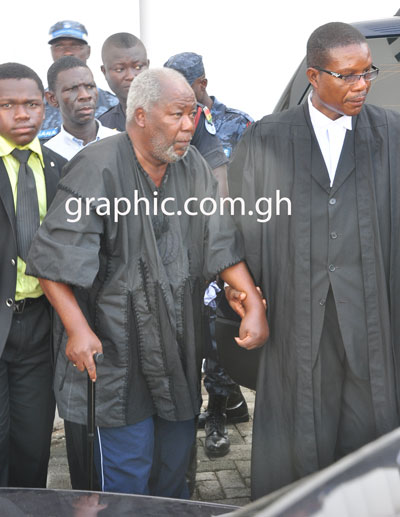 Over the years, he said, principles had been sacrificed and rules had been bent in favour of a select few.

“How can NANA AKUFO-ADDO openly admit to the world that he has lost both his Enrolment and Qualifying Certificates but took no steps to obtain duplicates while in active practice without the General Legal Council instituting a preliminary investigation of same?”.

“That the Defendant, NANA ADDO DANKWA  AKUFO-ADDO is aware or ought to be aware that not even the Chairman of the General Legal Council acting alone or in collaboration with the Secretary to the Council can take such a UNILATERAL decision to write a letter confirming him as having been enrolled and duly called to the Ghana Bar at a meeting of the General Legal Council held at the Supreme Court, Supreme Court Building on Tuesday, 8th July, 1975.

“The complicity of the Ghana Bar Association in trying to protect NANA AKUFO-ADDO is there for all to see. To start with Lawyer Frank Davies whose law firm entered appearance for and on behalf of, NANA AKUFO-ADDO is the chairman of the Accra Regional Branch of the Ghana Bar Association. How can such a person who should be interested that professional standards are not compromised at the Bar, be the lawyer for NANA   ADDO   DANKWA   AKUFO-ADDO”.

He said it was always easy for people to condemn him as old and senile instead of interrogating the issues he had raised which were indeed germaine to our very existence as a nation.

“The thriller in Manila is still on and I am determined to see it to its logical conclusion.  The world will one day remember me as an upright man who against all odds maintained that professional ethics should not be sacrificed for the convenience of one man.

“If this case was against an ordinary lawyer, would this have been the attitude of the General Legal Council, the Chief Justice, the Judiciary and the Ghana Bar Association”.