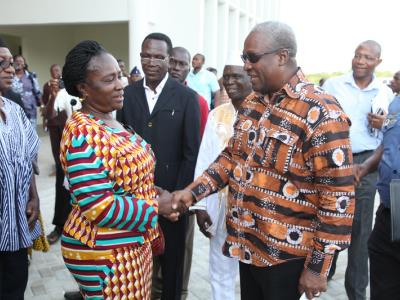 Professor Jane Naana Opoku Agyemang, Vice Presidential candidate of the National Democratic Congress (NDC) has stressed that the track record of the NDC under the leadership of John Mahama clearly demonstrates the ability of the NDC Flagbearer to work with all Ghanaians for improved livelihoods and national development.

Interacting with the Chiefs and people of the Central Region during a tour of the region, Professor Opoku Agyeman reminded them of the development agenda that Mahama pursued during his administration and highlighted the fact that elections are about development.

She said that election choices are informed by the ability to lead and effectively implement a clear development agenda for the country. Thus a vote for John Dramani Mahama should be the obvious choice.

She said former President Mahama has a proven track record of delivering on his promises, and will deliver on the programmes outlined in the Manifesto of the NDC; the "People's Manifesto."

She added that the programmes in the “People’s Manifesto" are designed to meet the needs of all segments of the Ghanaian society.

Prof. Opoku Agyemang reiterated the undisputed track record of the NDC of ensuring the equitable distribution of the resources of the country among the various administrative areas of the country.


She emphasized the need for peace before, during and after the December 7th elections. In connection with this she called on young people not to allow themselves to be used by politicians to create confusion at polling centres during the December elections.