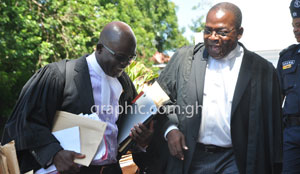 An application by counsel for President John Dramani Mahama for an independent audit of pink sheets to determine the actual number of polling stations whose results are in issue was Monday overruled by the Supreme Court.

The court ruled that the fact that the President and the National Democratic Congress (NDC) had responded to 8,621 polling stations meant that there was a definite number of pink sheets to deal with.

It, therefore, said the audit was premature and once that figure existed it did not appreciate the problem facing the respondents because when the question of audit manifested it would be dealt with appropriately.

Mr Tony Lithur, who had made the application when continuing his cross-examination of Dr Mahamadu Bawumia, the star witness in the petition, said although the court made an order that the parties provide better and further particulars, the petitioners had still not complied, having filed in respect of 8,621 of the alleged 11,138 polling stations in their petition.

Counsel said since each polling station represented numbers presented by the petitioners, it raised a big question as to the figures they had questioned in their petition.

Mr Lithur’s position was supported by counsel for the Electoral Commission (EC), Mr James Quashie-Idun, and Mr Tsatsu Tsikata for the NDC.

Counsel for the petitioners, Mr Phillip Addison, also supported the application but called for a full audit of the issues raised by the petition, instead of the partial audit relating to only the pink sheets.

Mr Lithur, for the second day, bombarded Dr Bawumia with a barrage of questions aimed at discrediting the case of the petitioners.

In the face-off with Dr Bawumia, Mr Lithur himself, at certain stages, could not help being caught up in the uncontrollable laughter generated by the witness’ response to his questions.

At one stage he even stated that the witness had succeeded in confusing him.

He argued that an independent verification of the exhibits in the presence of representatives of the parties to determine the matter was relevant.

Mr Tsikata said that process had been used in other jurisdictions where independent verifiers were appointed.

One of the judges, Mr Justice Paul Baffoe-Bonnie, asked counsel what would happen to the figures on the pink sheets if they were asking for the head count of only the pink sheets and not their contents because that contained the aggregate of violations proffered by the petitioners.

Mr Tsikata then said once the petitioners had mentioned the figure 11,138 as being tainted or fraught with irregularities, if the sheets exhibited by them did not reach that number then the petitioners had not complied with the court’s order on better and further particulars, for which reason they could not make any claim on the 8,621 polling stations.

Counsel for the EC also urged the court to go for the head count, since that would be in everybody’s interest to know how many polling stations were at stake.

Mr Addison replied that instead of a head count of only pink sheets, the audit should include the votes cast because what was important in the matter was the number of votes cast and not polling stations.

He said it was the number of votes that they were seeking to annul because it was that which would determine the matter because of its material effect on the results.

He maintained that the petitioners had complied with the court’s order and filed better and further particulars relating to 11,842 polling stations, which were later reduced to 11,138  after they had embarked on an electronically generated flawless analysis.

Mr Lithur, at that stage, objected to the full audit of the election results and argued that that was far away because the petitioners needed to prove their case before the court could order the audit.

‘’When you have not proved that there is over-voting, how can one order an audit? Audit follows when the court makes a finding that those irregularities have been proved,’’ he argued.

Mr Addison said once counsel for the President had not raised a single challenge regarding the authenticity of the pink sheets, he did not know why the respondents were drawing back after they had brought up the issue about audit.

To that, Mr Lithur stated that he was yet to do that and it was not for counsel to raise it.

Before he continued with his cross-examination of the witness, Mr Lithur told the court that last Friday he received from the court a letter to the effect that he should furnish the petitioners with a list of exhibits relating to pink sheets, to which he complied, but with a heavy heart.
Counsel said he thought that the factual basis might prejudice his cross-examination and that the way forward was that he intended to lead evidence in respect of pink sheets that were similar, since he had not had sufficient time to list them.

The President of the court, Mr Justice William Atuguba, jokingly replied that the court had received the response with a light heart and that as the case progressed the incidence of those pinks sheets would determine what to do.

Mr Lithur then launched himself into action by asking the witness to confirm whether or not pink sheets had not been duplicated.
Counsel said that tonnes of same pink sheets had been duplicated many times and photocopied to deceive the court, but Dr Bawumia, who agreed with him, said none was used twice in their analysis.

Dr Bawumia wanted to refresh his memory but counsel was hard on him and insisted he did not need that.

Monday, Mr Lithur varied his style of crosss-examining the witness and instead of picking single pink sheets for questioning, a number of them, which he labelled ‘lots’, were handed to the witness for study and answer.

In one instance, counsel showed a copy of a pink sheet involving the parliamentary election results, which he said had included to add up to the numbers and ostensibly to deceive the court.

Witness admitted that could be an error and that he did not understand how that document got into the exhibits submitted by the petitioners.

Regarding the 22 polling stations which petitioners said could not be traced to the voters register provided by the EC, witness said there were about 9,000 votes from them.

He agreed with counsel that agents of the petitioners observed and participated in the election at those 22 polling stations but intimated that that did not make what was illegal legal.

He further said he was not aware that any of their agents ever complained about those polling stations and it could be true that every single person who voted there was properly identified, aside from the place being supervised.