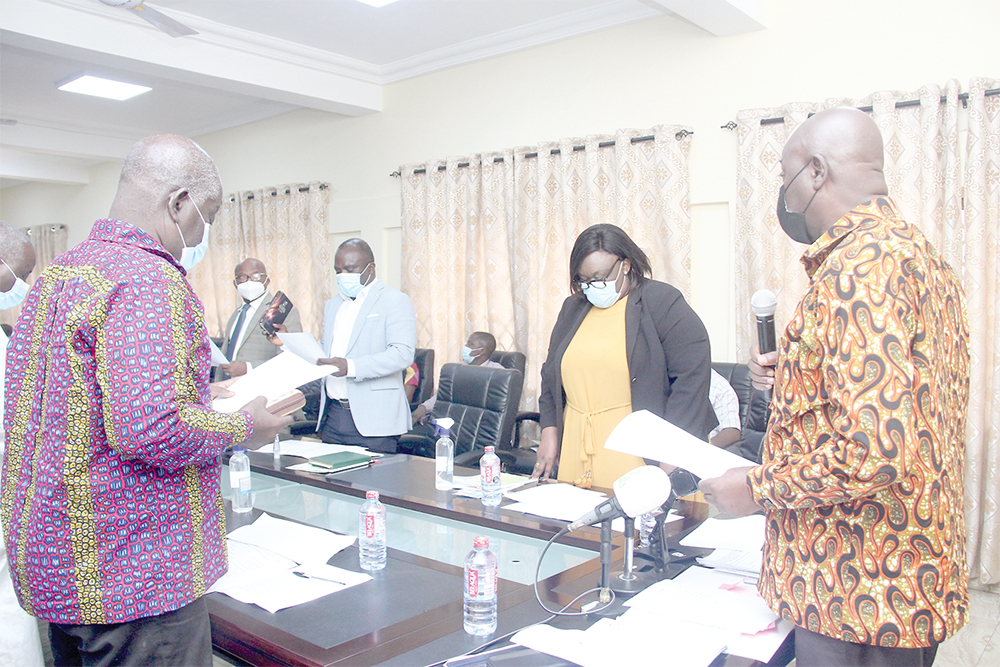 An 11-member Governing Council of the Institute of Local Government Studies (ILGS) has been inaugurated with a call on the members to ensure that management upholds high standards in the performance of their duties.

The Minister of Local Government, Decentralisation and Rural Development, Mr Dan Botwe, who made the càll, said that was to ensure that the institute stayed relevant ànd competitive.

The ILGS Council is chaired by Prof. Kwasi Kwafo Adarkwa, a former Vice-Chancellor of the Kwame Nkrumah University of Science and Technology (KNUST).

Mr Botwe, who took the members through the various oaths, including the oaths of office and secrecy, congratulated and thanked them for being of service to the country.

He said the Constitution provided that Parliament shall by law institute measures that were necessary to enhance the capacity of local government authorities to fulfil their stated mandate.

“The Constitution, therefore, anticipated local governments to be staffed with competent functionaries including chief executives, presiding members and assembly members to exercise oversight responsibilities of local governance in this country. It also envisages the availability of a core of technical and administrative staff with the requisite skills to implement the decisions of the district assemblies,” he said.

The MLGDRD Minister, who later presented three vehicles to the ILGS to enhance its operation, said the government promised in its 2016 manifesto to help develop the capacity and also the infrastructure of the institute and the logistics, among other things, of the institute were being improved upon.

He cited the construction of hostel facilities and lectures as examples.

Mr Botwe said those selected to be on the council were well vested in local governance and, therefore, had a lot to offer the country in terms of their expertise.

For his part, Prof. Adarkwa said one of the institute’s major role was to help train the next generation of assembly members as well as other interested persons for effective local governance and that in addition, “we are also fully aware of the institute’s desire to attain university status by 2023. This will be a major role for the council to provide strategic directions to management to ensure that this lofty idea becomes a reality that will change the face of the institute and propel it onto greater heights”.

Prof. Adarkwa said since the establishment of the institute in 1999 and its legal backing by Act 647 (2003), as a public organisation, its mandate had not changed and it was still relevant to date as provided for under Sections Two and Three of the Act 647/

“Council will, therefore, help management to deepen its capacity building role in support of the district assemblies, decentralisation and local governance in general.

“It is mindful to note that the achievement of Ghana’s development agenda, and for that matter, sustainable development largely depends on our local government structures and systems,” he said.