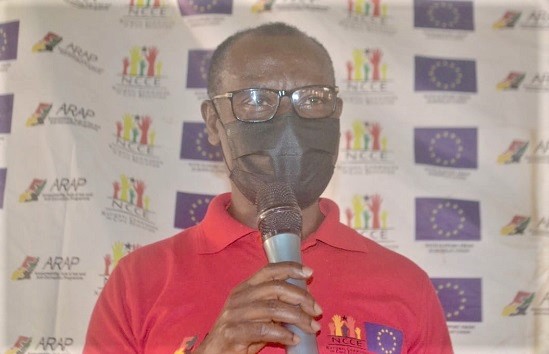 Recent incidents of political instability in countries that share border with Ghana are a major threat to the country’s peace and security, a Deputy Chairperson in charge of Operations of the National Commission for Civic Education (NCCE), Mr Samuel Asare Akuamoah, has said.

“The current security situation in Ghana’s neighbouring countries such as Burkina Faso, Mali, Niger and others should be of great concern to everyone to prevent the disruption of our democracy,” he said.

Mr Akuamoah said this at a symposium on violent extremism at the St John Bosco’s College of Education in Navrongo in the Kassena Nankana Municipality in the Upper East Region last Saturday.

It was attended mostly by the students of the school who were taken through a presentation on the modus operandi of the violent extremists and how they could help the security agencies scuttle their activities.

Also, a video documentary on political conflicts in some African countries was shown in a bid to let the participants know the consequences of wars on the citizenry and the nation.

The event formed part of a national campaign against violent extremism which is being carried out by the NCCE, in collaboration with the Ministry of National Security with funding from the European Union (EU).

Mr Akuamoah noted that with the growing activities of violent extremists in the sub-region, Ghana’s security was under threat.

“It is very important to intensify community engagements in the area of violent extremism and jihadist movements to prevent any possible spillover of their activities in the country since its consequences will be very devastating,” he said.

Mr Akuamoah called on the government and other stakeholders to take conscious steps towards tackling the current high unemployment rate among the youth to protect the nation’s peace.

“Our internal matters bordering on economic, tribal and chieftaincy issues have made people desperate and agitated and in their desperation, they can easily fall into the hands of violent extremists to destabilise the country,” he stated.

In a presentation on the topic: “Preventing violent extremism in Ghana”, the Upper East Regional Security Coordinator, Lieutenant Colonel (retd) Benjamin Ajibadeck cautioned the youth about the use of the social media since it had become a fertile ground for promoting activities of violent extremists.

“It is very worrying that the internet, particularly the social media, has become a fertile ground for recruiting many vulnerable youths to jihadist movements and violent extremist groups,” he said.

He further urged Ghanaians to be security-conscious at all times and notify security agencies of suspicious individuals living among them.