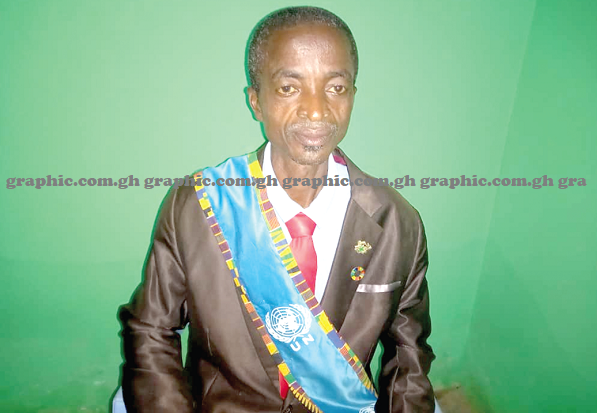 A private businessman and human rights activist, Wilberforce Andrews, has declared his intention to contest the 2024 general elections as an independent candidate.

Mr Andrews, a native of Eyan Denkyira, a community in Central Region said his motive to contest the presidential slot was to bring on board his rich expertise to address the country’s economic challenges.

Addressing the press at Ekumfi-Essakyir last Thursday, he said as a renowned accountant by profession, he had the wherewithal and knowledge to lead the country.

“As a citizen of Ghana, I have taken this bold decision to contest the 2024 presidential elections as the aspiring independent presidential candidate to bring on board my rich expertise to solve Ghana's chronic problems.

“It is a fact that white men are no way superior to the black man but only we don't trust ourselves. I have been following the International Monetary Fund (IMF), White House and the Europeans all this while and I have discovered the secrets behind their success,” he said, adding that “when voted for as president of the Republic Ghana, I will apply the same procedures which will eventually overcome the country’s shortcomings and will be ahead of them”.

Mr Andrews, who described himself as a United Nations Sustainable Development Goals Ambassador-General, said he would bring sanity into the society to engender economic growth.

“In fact, I do cherish and appreciate both the National Democratic Congress and New Patriotic Party because at least they have been able to contribute their quota towards nation building. I can assure the whole nation that my coming or intervention as independent presidential candidate will eliminate the winner-takes-all phenomenon.

“My system will operate an inclusive government to rescue the country from its hardships and tribulations. Soon I will file my document at the Electoral Commission when a call for nominees for presidential candidates is opened,” he emphasised.

“I am also a correspondent to International Monitory Fund (IMF) and an executive member to the following institutions: Global Alliance of Impact Lawyers (GAIL), United Nations Global Compact (UNGC), United Nations Association of Ghana (UNA-GH), Africa Awake foundation and Anti-Slavery International, among others.