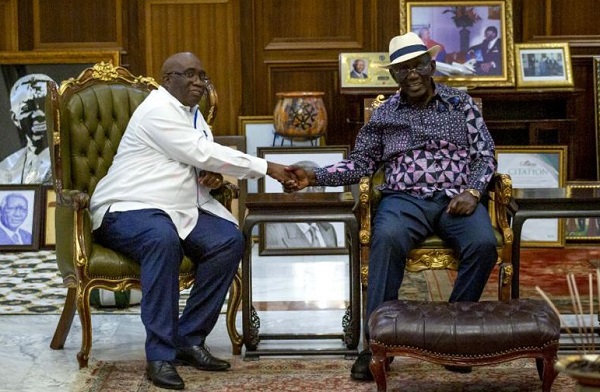 Former Attorney-General and Minister of Justice, Joe Ghartey, has assured former President John Agyekum Kufuor and the entire New Patriotic Party (NPP) membership that he will not work to divide the ruling party during his campaign to become flagbearer.

He gave the assurance when he visited the Former President at his Aburi Residence in the Eastern Region on Thursday, January 12, 2023.

Announcing to Mr Kufuor his intention to contest the upcoming presidential primaries of the NPP, Mr Ghartey said he will not disparage any of the other candidates during the race.

He pledged to promote unity in the NPP before, during and after the Presidential primary.

Mr Kufuor, who served as President from 2001 to 2009, said he was happy with the performance and professionalism of Mr Ghartey as Attorney-General and Minister of Justice following his appointment in 2006.

He recounted how before becoming Attorney-General in 2006, Mr Ghartey was the lawyer for his mother, Obapanyin Ama Dapaah and subsequently lawyer for his elder sister, Nana Durowaa.

Commenting on the conduct of the upcoming presidential primary, Mr Kufuor cautioned that all the aspirants should show sportsmanship, adding that at the end of the race, whoever wins should be supported by all.

He reminded Mr Ghartey that the NPP as a party did not belong to any single individual and that no one was bigger than the party, urging that it was important at all times to protect the integrity of the party.

According to Mr. Kufuor, he was still confident that the NPP was the better option to govern the country.

He expressed hope that the party will work hard to win the 2024 general elections.