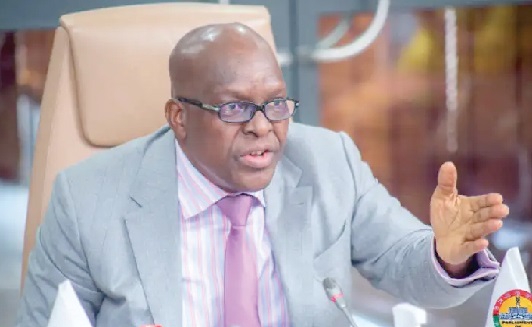 The Speaker of Parliament, Alban Sumana Kingsford Bagbin, has waded into the raging debate on the absence of the New Patriotic Party (NPP) Member of Parliament for Dome-Kwabenya, Sarah Adwoa Safo, by stating that she has been absent without permission.

“I want it to be known by all that I have not granted any such [media] interview anywhere. I have not said anything like that anywhere, and the Votes and Proceedings of the House are so loud that she is absent without permission,” he said, while addressing Parliament yesterday.

Mr Bagbin said he had not granted any such permission and that the votes and proceedings of Parliament had clearly captured her absence.

His explanation followed some media reports that suggested that he (Bagbin) was aware of the absence of Ms Safo from the House.

“It is not the Speaker who determines who is present and who is absent... and those who are absent with permission. And so please, I have received a lot of [telephone] calls from a number of media men on that issue and that is why I don't want to delay in making the world know that I have not said such a thing anywhere," Mr Bagbin said.

Per Article 97 (1)(C) of the 1992 Constitution, a Member of Parliament (MP) shall vacate his seat in Parliament “if he/she is absent without the permission in writing to the Speaker and he/she is unable to offer a reasonable explanation to the Parliamentary Committee on Privileges from 15 sittings of a meeting of Parliament during any period that Parliament has been summoned to meet and continues to meet”.

Her continuous absence has made the NPP MP for New Juaben South, Mr Michael Okyere-Baafi, to allege that she is trying to blackmail the government.

Per the rules of engagement, an MP can petition the Speaker of her absence from Parliament for 15 sitting days and the petition will be referred to the Privileges Committee to investigate.

Per Standing Order 31 of the House, “In all cases of proceedings where a complaint is made of a breach of privilege or contempt of Parliament, Mr Speaker may direct that the matter be referred to the Committee of Privileges.”

Section 2 of Standing Order 164 provides that, “It shall be the duty of the committee, by order of the House, to enquire into any complaint of contempt of Parliament or breach of privilege or any matter of privilege which may be referred to it and to recommend to the House such action as the committee may consider appropriate.”