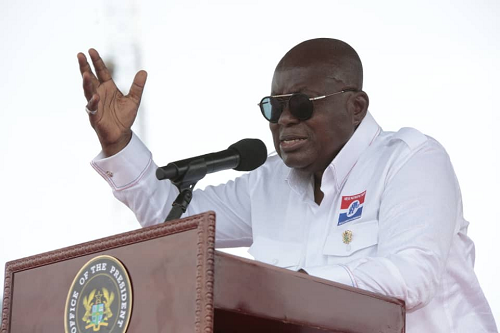 President Akufo-Addo has expressed shock and dismay at claims by former President John Dramani Mahama that he (Mahama) started the Free SHS.

He said such false claims by the NDC flagbearer was a clear indication that the NDC campaign was collapsing in confusion.

"When I promised to bring Free SHS, he said it was not possible and that I was lying to Ghanaians for their votes and that it was going to take over two decades before Ghana could implement such a policy,"  he stated.

Addressing drivers and market women at the Odorkor Trotro Station in Accra he said former President Mahama before 2016 told Ghanaians that even if he had Gh₵2 billion, he would not spend it on free SHS, but use it on something better.

The President said it was shocking that the very person who said it was not possible would turn round to claim that he brought the free SHS.

He said it was insensitive on the part of the former President to resort to lies and deceit as campaign tools and strategies.

President Akufo-Addo asked the people to cast their minds back to what he promised and what his government had done and vote for him because he had been truthful.

He asked "have I disappointed you?" to which the people responded with a loud no.