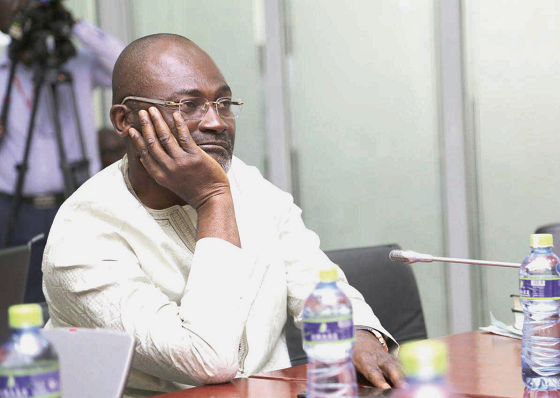 The vociferous Assin Central Member of Parliament (MP), Kennedy Ohene Agyapong has reacted to the government's announcement that it was going to engage with the International Monetary Fund (IMF) for support, to help Ghana build back in the face of challenges currently confronting the economy and says he is "sad".

Disclosing that, party bigwigs had earlier told him on Friday after the announcement not to comment on the issue, he cannot keep quiet.

The National Democratic Congress (NDC) government went to the IMF for a bailout because the "government mismanaged the economy", Mr Agyapong said.

Therefore, if the New Patriotic Party (NPP) government is also going to the IMF for support "it is just like handing over power to NDC without a contest, straight away."

"Because the noise we made, and I chew my own words back when I said NDC went to IMF because of mismanagement of the economy. So if NPP is [also] going to IMF, what am I going to say [now]?"

"So Breaking the 8 [winning Election 2024 NPP campaign message] is going to be tough. You cannot use the face of those who took us [back to IMF] to 'Break the 8', it won't work. My message to you is simple, you cannot, read my lips and I'm not scared of anybody in the party, I'll tell you the gospel truth, those who take you to IMF, those same faces, cannot Break the 8... a word to the wise is enough," he added.

"I'm very, very sad today, when I saw the publication that we are going to the IMF. You know that is what [former President] Mahama was praying for. He's gotten his wish. It will not be easy, it will take hard work, so we should brace ourselves that there is a task ahead of us and therefore it is only unity, that will help us sail through this 'Breaking the 8," Mr Agyapong said.

The Ministry of Information on Friday announced that President Nana Addo Dankwa Akufo-Addo, has authorised the Minister of Finance, Ken Ofori-Atta to commence formal engagements with the IMF, inviting the Fund to support an economic programme put together by the government of Ghana.

A statement issued by the Minister of Information, Kojo Oppong Nkrumah said this follows a telephone conversation between the President and the IMF Managing Director, Miss Kristalina Georgieva, conveying Ghana's decision to engage with the Fund.

"At a meeting on June 30th, 2022, cabinet indicated its support for the decision," the statement said.

"The engagement with the IMF will seek to provide balance of payment support as part of a broader effort to quicken Ghana's build back in the face of challenges induced by the Covid-19 pandemic and, recently, the Russia-Ukraine crises".

Ghana heads back to the IMF just over three years after exiting the programme in December 2018.

Ghanaians in recent months have been feeling the pinch of record inflation and the impact of the Russia-Ukraine war amid cuts in government spending to avoid a full-blown debt crisis.

This was despite the implementation of a raft of measures targeted at ensuring the achievement of the fiscal deficit target of 7.4% of GDP in 2022.

The country is also grappling with high debt and a depreciating currency, the cedi. A controversial tax on Electronic transactions (E-Levy) approved in April and presented as a solution for the economic challenges has also not generated expected revenues.