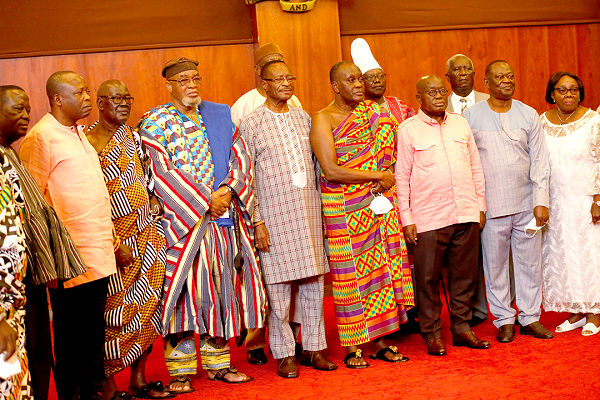 President Nana Addo Dankwa Akufo-Addo with some members of the Council of State after the meeting.Picture: Samuel Tei Adano Follow @Graphicgh

President Nana Addo Dankwa Akufo-Addo has stated that he has been humbled by the renewal of his mandate by a decisive majority of Ghanaian voters to complete a second and final term as President.

He said the renewed mandate placed a huge responsibility that required that he gave of his best, guided by God and the teachings of the holy scripture.

President Akufo-Addo made the statement when the Chairman of the Seventh Council of State, Nana Otuo Siriboe II, presented the third and final report of the council to the President at the Jubilee House in Accra.

The 49-page report covered the period between March 2019 and December 2020, and contains five separate sections of an executive summary, the modus operandi of the council, the activities of the council, conclusions and projections of the report, and the accompanying appendix.

President Akufo-Addo thanked the council members “not only for the quality of work that the council has exhibited in these four years, but also to the fidelity with which you have carried out your duty and your oath as members of the Council of State”.

He explained that there had never been a moment that he sought the advice or view of the Council of State that he found any hesitation on their part or inability to assist him.

“I am extremely lucky as President that I have been very lucky in the way this Council of State interacted with me and the presidency. I am, therefore, extremely grateful for the cooperation that the council has given,” the President stated.

President Akufo-Addo hinted that he would constitute a new council in the course of time, saying some of the old members might be reappointed.

He said although some of the appointments would depend on elections by respective electorates, “I will not find it amiss at all, if several of you are to reappear in the new council. I will find that reassuring”.

The Chairman of the council, Nana Otuo Siriboe, commended President Akufo-Addo for receiving “the endorsement of the majority of Ghanaians to continue with the good works”.

“We express our sincere and heartfelt wishes for the success of your next administration, which we believe will aim at consolidating the gains you have made in order to leave a lasting legacy,” he said.

Nana Otuo Siriboe, who is also the Omanhene of Juaben Traditional Area, commended the President and expressed the council’s gratitude to him for offering “a listening ear” over the last four years, and for his preparedness to meet with the council even at the shortest notice.

“We note with satisfaction that our suggestions and recommendations have largely been accepted and implemented by your government,” he added.

He expressed the council’s gratitude to the President for his cooperation and support, as well as the cooperation of Parliament, for the passage of the Council of State Act 2020.

The Act, Nana Otuo Siriboe explained, would promote greater efficiency in the work of the council through the appointment of its own staff, control of its own budget, and the regulation of its procedures, among others.

Nana Otuo Siriboe said the council, upon assumption of office, pledged to produce annual reports on its activities, and said it had fulfilled its promise and produced three such reports.