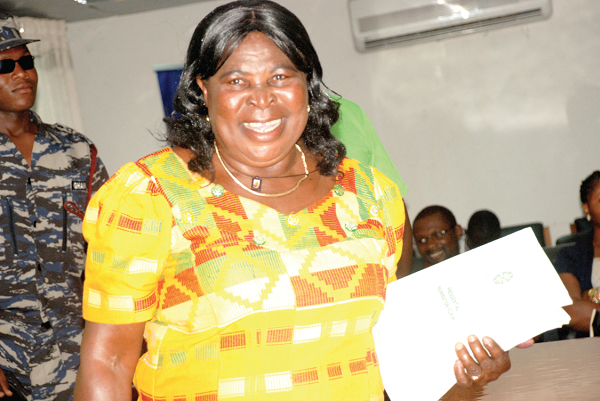 The presidential candidate of the Ghana Freedom Party (GFP), Madam Akua Donkor, has appealed to the electorate to vote for her to bring peace and happiness to all.

She said the only way people could enjoy peace was to make life comfortable for them.

In an interview with the Daily Graphic in Accra, Madam Donkor said she would make businesses in the country’s ports free from any charges, including education, from kindergarten to SHS, and provide healthcare facilities, water and electricity.

According to her, she intended to use revenue accrued from the country’s natural resources such as gas and oil, minerals, cocoa and timber to improve on the life of the people.

She further pledged to support journalists by providing each media house with a bus to enable them to go about their duties effectively.

The GFP presidential hopeful also promised to extend maternity leave from three months to a year for nursing mothers so they can have enough time to properly take care of themselves and their babies.

For orphans, the mentally impaired and physically challenged persons, Madam Donkor said she would provide shelter for them and also cater for their basic needs, adding that her government would also assist owners of orphanages to cater for the needs of the children.

Traders would also be provided with modern market facilities to facilitate their businesses.

The flag bearer said even though she had not had any formal education, truth, transparency and love for humanity set her apart from the other presidential aspirants.

Madam Donkor also said her opponents had not demonstrated enough commitment to tackle corruption which she said was ruining the country.

According to her, the country would continue to be poorer if truth and transparency did not prevail, adding that when voted into power, she would rule the nation with integrity.

She described her chances of winning the elections as bright because she is a mother who understands the plight of the people.

Madam Donkor is the only child of her parents. She was born on February 1952, and hails from Afigya Kwabre in the Ashanti Region.

She is a cocoa farmer and has had no formal education because of her love for farming from childhood.

Madam Donkor was elected Assembly Member for Hemang after a keenly contested election with six other opponents.

Her ambition to be President was evident in the 2012 polls where she applied to contest as an Independent candidate.

However, she was disqualified by the Electoral Commission (EC), a decision she disagreed with, but has tagged herself ‘Her Excellency’ ever since.

In 2016, she was barred again by the EC because of the numerous errors on her nomination form.

In October this year, she successfully filed her documents to contest this year’s elections as the flag bearer of the GFP and she is number five on the ballot paper.

Her running mate is Mr Ernest Frimpong-Manso Adakabre, a journalist and lawyer.