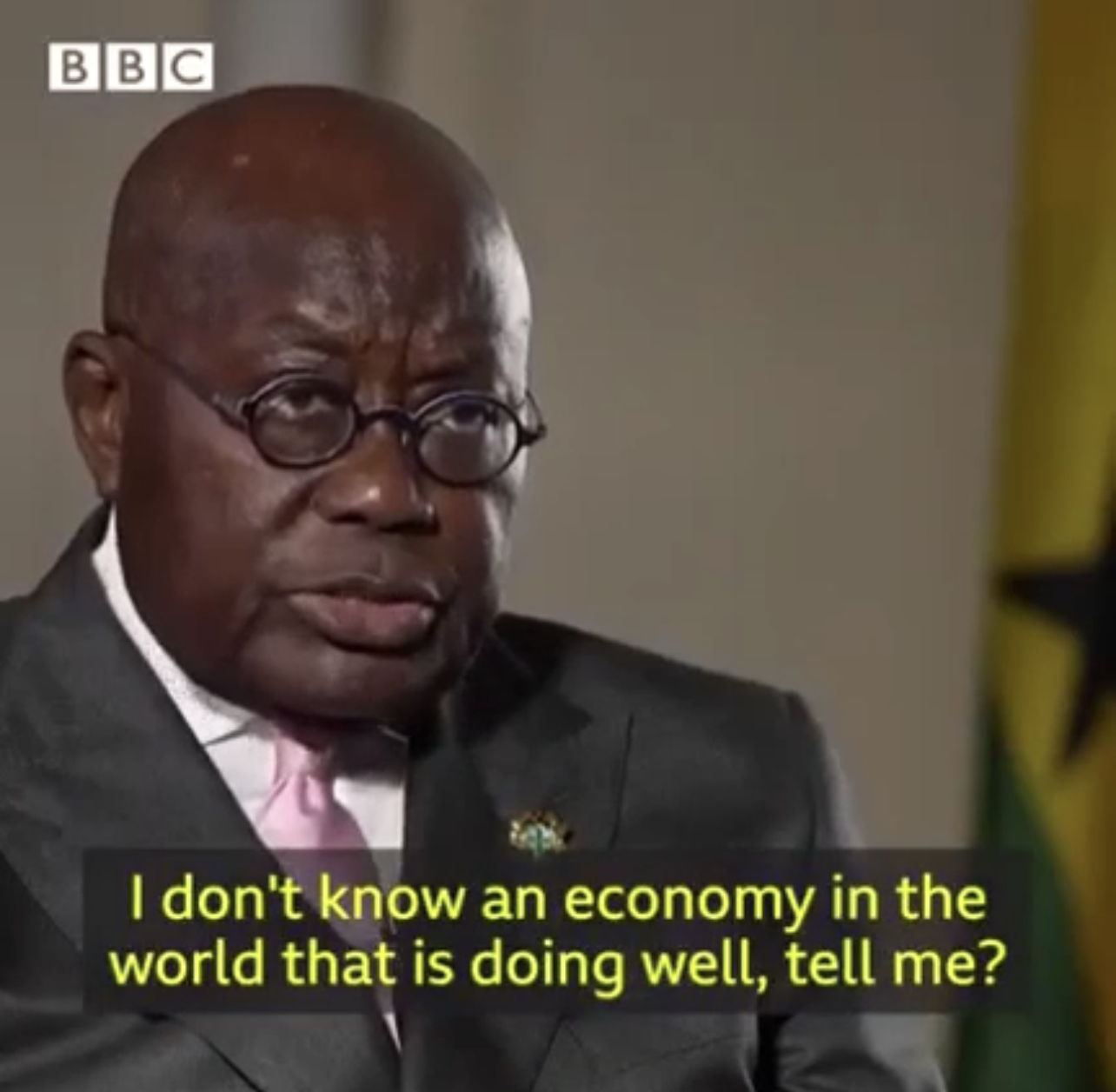 President Nana Addo Dankwa Akufo-Addo says Ghana is instituting measures to help the country recover from the ravages of COVID-19.

He acknowledged that the world is going through difficult times and "Ghana is no exception."

"There is no country in the world that is escaping the ravages of both Covid-19 and also the impact of the Ukraine [invasion] but what you need to look at, where are the elements being put on the ground that look beyond the Covid and beyond the Russian Ukraine war? I think that you will find that in Ghana."

In an interview with the BBC's Peter Okwoche, President Akufo-Addo said that he does not know an economy in the world that is currently doing well.
He said the recovery programme that Ghana have is that which is considered "very credible. And it is what is going to give us [Ghana] the opportunity to come out of this period a stronger economy, and it is that future that we're looking at, when we're attracting people."

The BBC journalist had asked President Akufo-Addo in London, where he had gone to launch the programme; "Destination Ghana", that if he looked at the Ghanaian economy at the moment, "you know its doing, I mean, let's just be honest, it's doing terribly."

And Okwoche said, "When your inflation, in your country, inflation in Ghana..."

President Akufo-Addo said: "I don't know an economy in the world that is doing well, tell me? Where you are here, [London], the highest inflation."

Okwoche maintained the Ghanaian cedi has fallen 20 percent on the dollar. The worst after Russia, which has a lot of sanctions against it.

But President Akufo-Addo said the cedi has begun to firm up where "We're seeing the cedi systematically appreciating against the dollar."

Peter Okwoche: "People still can't employ, you know, I [was] just reading today, you know people in the hospitality industry that you're pushing so hard, have been laying their staff off. We've got taxi driver unions threatening strikes because of the spiralling fuel costs. I mean it doesn't look like a place that I want to go and put my money".

That was when President Akufo-Addo asked Okwoche, "Where would you want to put your money today? In Britain, which is suffering the worst standard of living statistics for over 30 years? Is that where?"

"Let's situate ourselves correctly. The world is going through very difficult times. Ghana is no exception. Nigeria is no exception. There is no country in the world that is escaping the ravages of both Covid-19 and also the impact of the Ukraine [war] but what you need to look at, where are the elements being put on the ground that look beyond the Covid and the Russian Ukraine war?" President Akufo-Addo said.

When Okwoche turned attention on the recently passed Electronic Transaction levy, which is one of the structures that Ghana has put in place as part of the recovery, which he said "a lot of people are calling it a stealth tax on people who are already impoverished" and a 1.5% tax going to be imposed on people who do business on their mobile phone by sending money.

President Akufo-Addo's response was that: "The digital economy, the mobile economy, is emerging as the biggest economy in the country and for a long period has not had any taxation at all. So it is important now that they also come into the net."

"Our country has one of the lowest tax to GDP ratios of any country in West Africa and of an equivalent economy. The Ecowas area, the general average, today, tax to GDP average is about 18%. Ghana we are 13%, so if you're talking about a country, which is already overtaxed, if anything at all, it's undertaxed."
Watch a video of the interview below

Talking about issues on the African sub region, President Akufo-Addo said the regional body Ecowas will continue to oppose the new cycle of coups in West Africa.

He said aspiring leaders should seek popular mandates through the ballot and not by "unconstitutional" means like military takeovers.