'I became Second Lady by grace of God' - Samira Bawumia 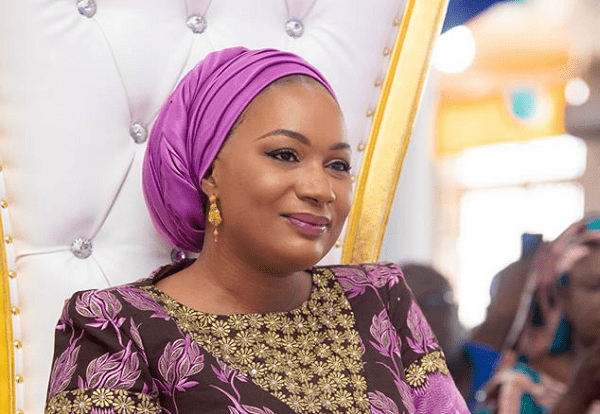 Mrs Samira Bawumia has said it was through the grace of God that she became the Second Lady of Ghana.

According to her, but for the intervention of God, she could not rise to that key status in Ghana.

Hajia Bawumia was speaking in a radio interview on Accra based Asempa FM’s Ekosii Sen talk programme on Monday, [March 9, 2020] as part of the celebration of the 2020 International Women’s Day (IWD) celebration which fell on Sunday March 8, 2020.

Touching on the need to educate the girl child, Hajia Bawumia thanked her parents for taking her to school making her the “first graduate in her family from both mother and father’s side”.

She said that if her parents had not sent her to school it would have been difficult to reach that feat of a Second Lady status.

“OB [referring to the host of the programme], as you know if I had not gone to school, becoming the Second Lady could be challenged. And I thank God that he picked me from where I was to make me the Second Lady."

“I am grateful to God. What it means also is that whatever God says about you will surely come to pass”, she indicated on the show.

Since becoming the "Second Lady", Mrs Bawumia has helped to lift the image of Ghana in the eyes of the world.

In October 2019, she was named the first of seven global honourees by Sustainable Energy for All (SEforAll), in partnership with Ashden.

This is in recognition of her significant contribution towards mobilising action for the United Nations’ Sustainable Development Goal (SDG) 7; the call for universal access to modern reliable, renewable and affordable energy for all by 2030.

The Seven For 7 is an annual event hosted by SEforAll, an international organization launched by former UN Secretary-General Ban Ki-moon, to drive action toward the achievement of Sustainable Development Goal 7 (SDG7), and the Paris Agreement; together with Ashden, a London-based charity focused on improving lives, through sustainable energy and development.

The event was hosted after the 2019 Climate Action Summit and a high-level meeting on Universal Health Coverage at the United Nations General Assembly.

As a Global Ambassador for the Clean Cooking Alliance, the Second Lady is championing the adoption of clean cooking solutions, particularly among women and girls, in Ghana, Africa and across the world. The Clean Cooking Alliance is a non-profit organisation hosted by the United Nations Foundation to spearhead the adoption of clean and efficient cooking solutions, in households and institutions, across the world.

Mrs Bawumia, through her not-for-profit organisation, Samira Empowerment and Humanitarian Projects (SEHP) has also provided critical interventions in the areas of health, education and women’s empowerment. Her organization aims to reduce the high rates of maternal and child mortality in the Ghana by distributing birth kits to underprivileged expectant mothers and by providing medical equipment and pharmaceuticals to selected health facilities across Ghana.

Receiving her award, the Second Lady commended the organisers for acknowledging her contribution to global climate action. She indicated that the issue of access to clean cooking solutions is an environmental, health and development issue. As such, it should be given all the attention it deserves.