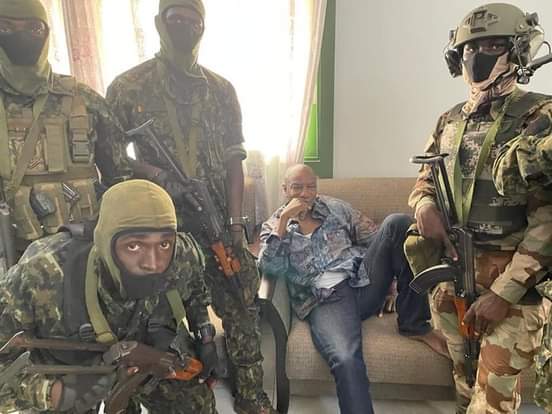 Under detention Alpha Conde is surrounded by soldiers
30.5k Shares

It appears Ghana's late former President Jerry John Rawlings has something to do with the current coup d'etat in neighbouring Guinea Conakry.

Coup leader Mamady Doumbouya is justifying the action with a motivational quote he attributes to the late Jerry Rawlings.

Since then many, including the ECOWAS, AU and UN have condemned the coup and asked that the country be returned to constitutional order. ECOWAS in particular has even threatened sanctions should there be failure to restore constitutional rule.

But Mamady Doumbouya is justifying the coup, and offers many reasons, including a statement purported to have been made by Jerry Rawlings.

“If the people are crushed by their own elites, it is up to the army to give the people their freedom,” he is reported to quote Rawlings.

Doumbouya also professes a desire for national unity for all Guineans and equal access to all that nationhood has to offer citizens.

Meanwhile the BBC reports that President Condé remains in detention, but his fate is unclear, while cabinet ministers were to attend a mandatory meeting or be considered rebels.

Rawlings staged two successful coups in Ghana and is noted to be Ghana's longest serving head of state, running in excess of two decades in the role.

He often cited inequalities and poverty, as well as a shameless display of opulence by a privileged elite as justification for his interventions, and in a tweet on October 23, 2020, personally disapproved of what he termed numerous lives being lost owing to Conde’s designs to remain in power after two terms, and urged Conde to do better and protect the people.

“The numerous lives that are being lost on account of the regime trying to extend its stay in office is grossly unacceptable. Guinea’s President Alpha Conde must do better to protect the people and deliver their mandate. I call on all parties to put the national interest ahead of partisan concerns and preserve the peace.”

The numerous lives that are being lost on account of the regime trying to extend its stay in office is grossly unacceptable. Guinea’s President Alpha Conde must do better to protect the people and deliver their mandate... pic.twitter.com/B4blu41onn