Group to hit Accra streets over high cost of living 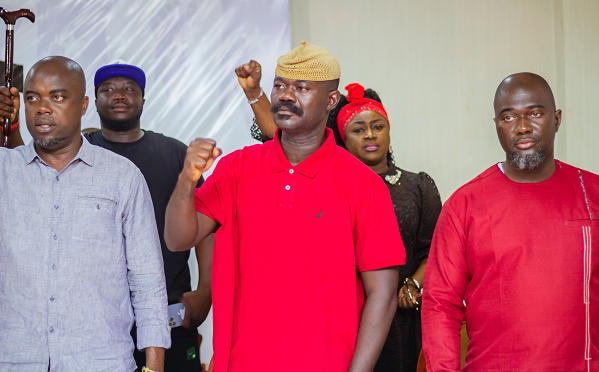 Members of the newly formed nationalist group, Arise-Ghana, have served notice to embark on mammoth demonstration in Accra on June 21, 2022, if government fails to meet their demands.

Speaking at the maiden press conference of the group on Wednesday, May 25, 2022 in Accra, the General Secretary of All People's Congress (APC) and leading member of the group, Mordecai Thiombiano, said the group will be left with no option than to stage series of demonstrations across the country if the government did not meet their demands.

He said the planned demonstration was part of activities the group will be using to save the country from mismanagement.

“Arise Ghana is an amalgamation of activists who through advocacy and nationalistic mobilisation, will seek to lead a crusade against the continuous misrule, mismanagement and maladministration of our dear nation Ghana by today’s duty bearers,” he noted.

Mr Thiombiano added, “We are determined to relentlessly champion the common cause of the Ghanaian people, provide a voice for the voiceless and vigorously seek reforms that will bring about the needed change in the socio-economic, politico-social and general wellbeing of the Ghanaian citizenry.”

He explained that the high cost of fuel and the payment of e-levy were all making life unbearable for many Ghanaians.

For him, the government’s planned introduction of the Agyapa Royalties deal as well as the issuance of the E.I 144 which is intended to declassify part of the Achimota Forest Reserve would go a long way to affect the country.

He has, therefore, called on all “Ghanaians who desire to see a change in the affairs of our beloved country to come out in their numbers and join us on the streets of Accra for this historic protest.”