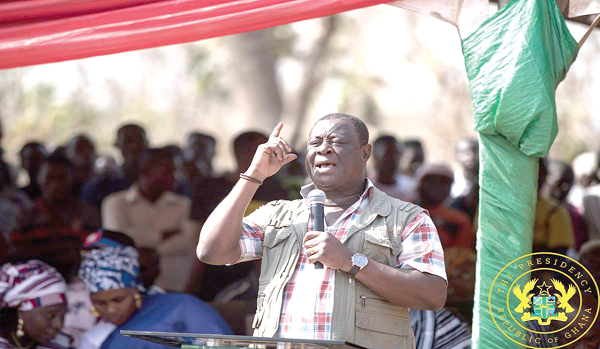 The Minister of Roads and Highways, Mr Kwasi Amoako-Atta, has told Parliament that the government is committed to completing work on the stalled Assin Bereku town roads and the Bereku-Ninkyiso road in the Assin North Constituency in the Central Region.

He stated that the although the progress of work on the gravel surface road, which is currently in poor condition, was 22 per cent complete, the government had not yet paid the contractor any money so far.

He, therefore, urged the contractor, Gwakunda Engineering, to raise an invoice for the work done to be vetted and be paid.

The minister gave the assurance when he answered a question by the National Democratic Congress (NDC) Member of Parliament for Assin North, Mr James Gyakye Quayson, on the floor of Parliament last Friday.

The MP had sought to know when Gwakunda Engineering would be paid for the 20 per cent of work done so far on the Assin Bereku roads and the Bereku to Ninkyiso road in the constituency to enable the contractor to go back to site.

Responding, Mr Amoako-Atta said the contract for the first phase of bitumen surfacing of the 2.5 kilometres (km) Assin Bereku-Ninkyiso feeder road and the 1.8 km Assin Bereku town roads was awarded on December 19, 2019.

“The progress of work is projected at 22 per cent physical completion.

“The contractor working on the project has neither submitted any invoice for vetting nor requested for joint measurement.

Therefore, no IPC has been raised and the employer (government) does not owe the contractor,” he said.