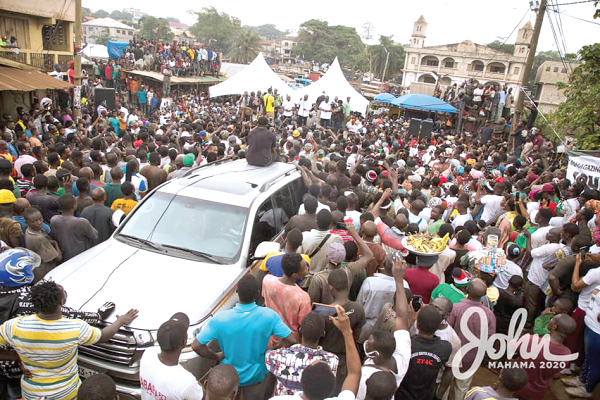 The presidential candidate of the National Democratic Congress (NDC), former President John Dramani Mahama, has pledged to transform the Suame Magazine in Kumasi into a modern automobile industrial hub to provide business avenues and jobs for people.

He said the next NDC government would redesign and reconstruct the vehicle spare parts and engineering hub at Suame into a national automobile hub that would serve the needs of Ghanaians and vehicle users in West Africa.

He said the transformation would hinge on the creation of sustainable jobs, skills transfer and indegenisation of business to help spur indigenous entrepreneurship and bridge the unemployment gap in the country.

Mr Mahama made the promise when he addressed a rally at the Suame Magazine as part of his six-day tour of the Ashanti Region last Wednesday.

He said as part of the transformation, the next NDC government would restructure the operations of the spare parts hub to include a training centre to equip the artisans with modern technologies and skills.

Mr Mahama said the party's achievements in the area of infrastructure in the Ashanti Region was testament of its ability to deliver on its promise.

Mr Mahama also bemoaned what he described as the deplorable nature of the roads infrastructure in the Suame area and promised to address it.

He said the redesign of the Suame Magazine would include the upgrade of roads within the area as well as the construction of drains to ease movement.

He said the Suame Magazine was a critical national asset that served as a source of livelihood for about 200,000 people.

He said the next NDC administration planned to make the area one of the corner stones for the National Apprenticeship Programme that the party planned to create.

He said his administration would utilise the expertise and opportunities of the people and the area to make the apprenticeship programme a reality.

To make that happen, he said, all the master artisans at the Suame Magazine would be registered under the Apprenticeship Programme to provide training to apprentices at the cost of the government.

"We will involve all of you to make the National Apprenticeship Programme a success and the government will pay you for the services you would render so that we can build the next generation, " he said.

Mr Mahama said the apprentices would also get monthly stipends while under training and would also receive equipment to set up their own businesses on completion of their training.

He said that arrangement was geared towards the transformation of the economy by equipping many people with employable skills.

The former President assured the gathering that the next NDC government intended to review the Customs (Amendment) Act, (Act 1014) 2020 to help save the local automobile industry at Suame Magazine, Kokompe and Abossey Okai in the Greater Accra Region from collapse.

He said the party planned to scrap the portion of the law that banned the importation of salvaged vehicles into the country.

“Vehicle assembling companies will operate as a complement to local industry but not to cancel out the daily bread of Ghanaians,” he said.