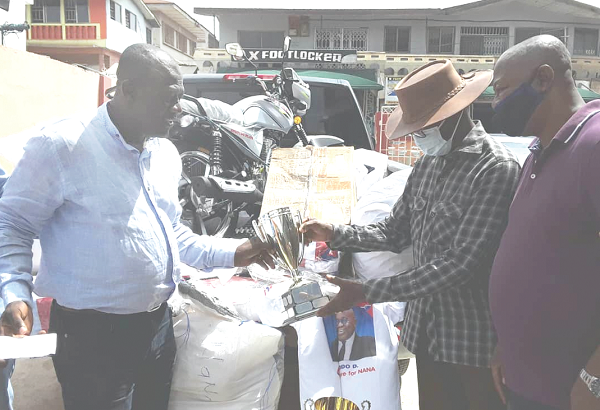 The New Patriotic Party (NPP) Parliamentary Candidate for Fomena in the Ashanti Region, Mr Philip Ofori Asante, has said the incumbent Member of Parliament (MP) who is standing as an independent candidate in the December 7 general election poses no threat to the party.

He expressed confidence that the NPP would win the Fomena seat hands down while the Presidential Candidate, President Nana Addo Dankwa Akufo-Addo, would also increase the popular votes.

He said this at a short ceremony at the NPP regional office in Kumasi where some campaign items and an undisclosed amount of money were donated by an NPP elder and philanthropist, Dr Jebir Kebir Moussa, to support the party’s campaign in the constituency.

The items included a brand new motorbike, party-branded T-shirts, footwear and 12 trophies to promote football competitions in communities in the constituency.

Mr Asante said: “We have done enough to retain the parliamentary seat without any difficulty and also increase the popular votes for the President to at least 80 per cent.”

He expressed gratitude to Dr Moussa for the support which he described as timely.

He said the trophies would greatly help the inter community football gala that the party intended to organise in the coming week as part of its campaign strategies.

Dr Moussa said he was moved by President Akufo-Addo’s call on the party to work hard to ensure total victory in Fomena to prove to all that the NPP was the party for the people.

He was optimistic that Fomena would remain NPP.

Presenting the items on behalf of the benefactor, the Ashanti Regional Secretary of the NPP, Mr Sam Pyne, said Dr Moussa had been making donations to assist the party at the grassroots.

He said the NPP elder had this year, made similar presentations to the Saboba, Mion and Chereponi constituencies.

Mr Pyne praised the party elder and commended him for his continuous support for the party particularly in needy constituencies in their quest to help the party to win the election.