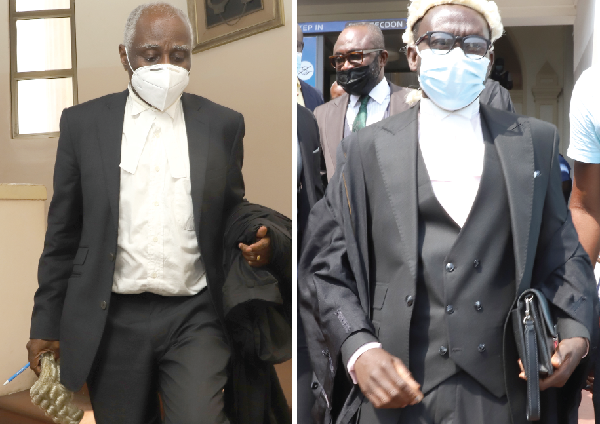 The Supreme Court will today give a ruling on whether or not to uphold an injunction placed on the gazetting of the New Patriotic Party (NPP) Member of Parliament (MP) elect for Hohoe, Mr John-Peter Amewu, by the Ho High Court.

On December 23, 2020, the Ho High Court, presided over by Justice George Buadi, placed an injunction on Mr Amewu’s gazetting following an application by the interested parties, led by the National Democratic Congress (NDC) parliamentary candidate for Hohoe in the 2020 election, Professor Magaret Kweku.

It was their case that the Electoral Commission (EC) prevented the people of Santrokofi, Akpafu, Likpe and Lolobi (SALL) from voting in the parliamentary elections in the December 2020 elections, and allowed them to only vote in the presidential elections.

On December 29, last year, the A-G, who was a respondent in the legal action at the High Court, invoked the supervisory jurisdiction of the Supreme Court seeking an order of certiorari to quash the injunction placed on the gazetting of Mr Amewu.

The A-G further asked the Supreme Court to prohibit the High Court from hearing the application filed by Prof. Kweku and the four others.

It contends that the Ho High Court had no jurisdiction to place an injunction on the gazetting of Mr Amewu as MP-elect because the entire legal action leading to the decision was a nullity.

Even before the A-G could move the certiorari application, Mr Tsikata raised an objection seeking Justice Honyenuga to recuse himself from the panel hearing the case.

According to Mr Tsikata, Justice Honyenuga was a close friend of Mr Amewu and there was a possibility that he would be biased if he was part of the panel that would determine the A-G's application.

He said Mr Amewu would be the ultimate beneficiary if the court upheld the A-G’s application.

Mr Tsikata urged the court to conduct a mini trial to determine the appropriateness of Justice Honyenuga as a member of the panel.

Counsel said he was ready to present witnesses who would testify to the effect that Justice Honyenuga had a “long standing personal and close relationship with Mr Amewu.”

Allowing Justice Honyenuga to even be part of the panel to determine his objection, he argued, would defeat the principle of the rules of natural justice because Justice Honyenuga would be a judge in his own cause.

In his response, Mr Dame urged the court to overrule Mr Tsikata’s objection arguing that it was unmeritorious and had no basis in law.

“Counsel owes a duty to allude to certain circumstances suggestive of bias or real likelihood of bias,” he said.

The court agreed with the Deputy A-G and overruled the objection.

In a unanimous decision read by Justice Appau, the court held that the objection had no merit since Mr Tsikata could not back it with any evidence.

Apart from that, the court held that Mr Amewu was not a party to the application and that his interest in it was too remote.

Moving the motion itself, the Deputy A-G based his arguments on two grounds.

First, he argued that the application filed at the Ho High Court by the interested parties was a parliamentary election petition dressed as human rights action.

In view of that, he argued that the High Court had no jurisdiction to entertain a parliamentary election petition as a human rights action under Article 33 of the 1992 Constitution.

Parliamentary election petition, he argued, was provided for under Article 99 of the 1992 Constitution and not Article 33 of the Constitution.

“Any attempt to dress a parliamentary petition as another action will be unlawful,” the Deputy A-G argued.

On the second ground, the Deputy A-G argued that SALL was part of the Oti Region and, therefore, it could not be part of Hohoe constituency which is in the Volta Region.

Such an act, he said, would be a violation of Article 47 (2) of the 1992 Constitution which provides that a constituency shall fall within the boundaries of only one region.

According to him, it was “erroneous” for the EC to have prevented the people of SALL from voting in the parliamentary election that came off on December 7,2020.

He argued that the Representation of the People (Parliamentary Constituencies) Instrument, 2020 C.I 128 which came into force on August 11, 2020 placed SALL under the Buem constituency.

“If anything, the election in Buem should rather be annulled for the people of SALL to vote and not the Hohoe Constituency,” he argued.

In his response, Mr Tsikata urged the court to dismiss the A-G’s argument.

According to him, the admission by the A-G shows that the rights of the people of SALL to vote and also to be represented in Parliament was violated by the EC.

He argued that the right to vote was also a fundamental human right which meant the High Court had the jurisdiction to entertain his clients application.

Counsel further submitted that CI 128 which placed SALL in the Buem Constituency was unconstitutional because it was not gazetted on the day it was laid before Parliament as required by Article 11 (7) of the 1992 Constitution.