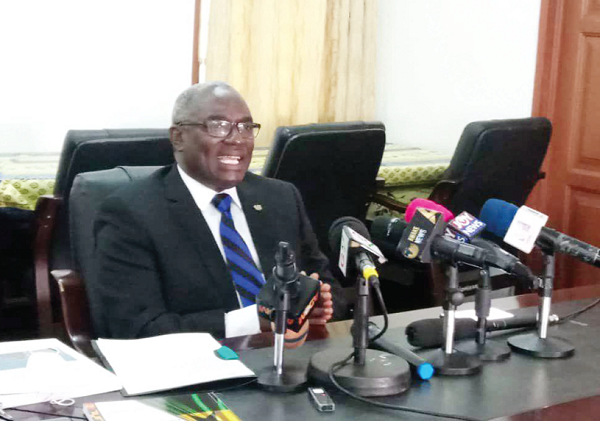 The Director-General of the NDPC, Dr Essiem Mensah-Abrampa, who made this known, said the document had been developed over the last four years based on broad consultations and its envisaged sustainable national development ahead of the centenary celebration of Ghana’s independence.

Additionally, he said, the policy, dubbed: “Ghana @ 100 Long-term Development Framework”, would serve as a blueprint to which all political party manifestos must be aligned.

“We at the NDPC have been doing the planning work and political parties have also been doing their manifestos; but there must be a meeting point between manifestos and national priorities,” he said.

Dr Mensah-Abrampa, who said this at a media briefing held by the commission yesterday, said the policy framework would be launched at the 13th National Development Forum in Accra today.

He said the forum, on the theme: “Towards Election 2020: Political party manifestos and long-term strategic needs of Ghana”, would attract key personalities to speak on national development priorities.

Among the high-profile personalities who will speak at the event are the Chairman of the NDPC, Professor Stephen Adei; the Director of the Institute of Statistical, Social and Economic Research (ISSER) of the University of Ghana, Professor Peter Quartey, and the Chairperson of the STAR-Ghana Foundation, Dr Esther Offei-Aboagye.

Dr Mensah-Abrampa observed that although the NDPC had held 12 national development fora already, the 13th was important because of the launch of the NDP.

He noted that electoral manifestos played a critical role in democratic governance and needed to be aligned to the national development agenda.

He also said since political parties made promises to the citizens based on manifestos, such documents must be in tune with the larger development aspirations of the country.

“Political parties that are successful form governments, having raised the expectations of the public with their political campaign promises. Since the focus of performance is based on their manifestos, consistency with the long-term sustainable development agenda of the country is not assured, neither is continuity of programmes, projects and key development initiatives guaranteed,” he said.

He added that the launch of the NDP would go a long way to address the challenge of continuity in the implementation of policies by successive governments.

Since the colonial era, Ghana has been pursuing many initiatives targeted at improving sustainable development.

The Governor of the then Gold Coast (now Ghana), Sir Gordon Guggisberg, crafted a development plan in 1919, but its implementation started from 1920 to 1930.

That development gave birth to great projects such as the Korle Bu Hospital, which later became a teaching hospital; the railway system and the Takoradi Harbour.

After Guggisberg’s development plan, the next significant plan was President Kwame Nkrumah’s seven-year development plan, which led to achievements such as the Akosombo Dam, the Tema Harbour, various educational institutions, including the Kwame Nkrumah University of Science and Technology (KNUST) and secondary schools, and the import-substituted industries

Despite all these initiatives, there are concerns that the piecemeal implementation of these frameworks has not helped sustainable development because of the truncation of the projects.

The launch of a long-term development plan by the NDPC is expected to change the narrative and create a framework for political parties to fit their manifestos in.