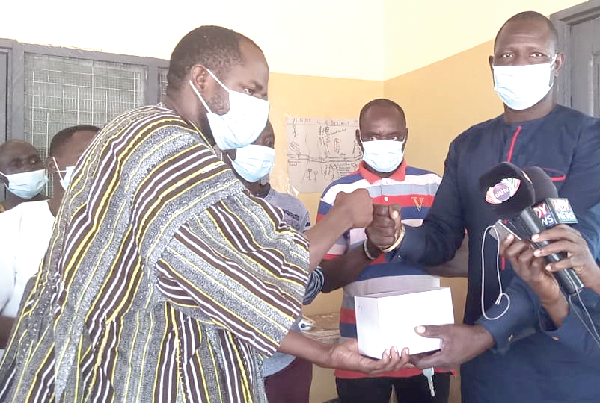 The Member of Parliament (MP) for the Yunyoo/Nansuan Constituency in the North East Region, Mr Liwaal Oscar, has presented a large quantity of drugs and vaccines to the health directorate to contain the scabies outbreak in the area.

The medical consumables are to help the District Health Directorate to treat the victims and also vaccinate those who have not been infected with the skin disease.

The donation follows a report in the August 6, 2021, edition of the Daily Graphic, highlighting an outbreak of a strange skin disease suspected to be scabies, which has left many residents with rashes all over their bodies in the district.

The skin disease, which is said to have spread across the district, has infected many residents, particularly women and children with sores on their genitals, fingers, buttocks, knees, toes and head.

Checks by the Daily Graphic revealed that communities such as Kinkawng, Sanbali, Gbanguri, Nagbal and Sangbani are the worst affected, as almost every household has one or more persons being infected, especially women and toddlers.

The Constituency Chairman of the New Patriotic Party (NPP), Mr Sampson Nambu, who presented the items to the District Health Directorate on behalf of the MP last Thursday, said the gesture was part of efforts to help contain the disease.

He pledged the MP’s continuous support to ensure that the disease, which was making life uncomfortable for the residents, was eliminated.

For his part, the District Director of Health Services, Mr Abdul Rahaman, thanked the MP for the gesture and said a medical team would be constituted as a matter of urgency to move into the various communities to treat and vaccinate the people in the coming days.

He said the medical supplies had come at the right time as the directorate was also making efforts to contain the contagious disease.

Some residents who spoke to the Daily Graphic commended the MP for coming to their aid.

They, however, appealed to the government for a district hospital to help attend to their health needs.

The Daily Graphic gathered that the disease was first reported in January and had since spread across the entire district.

Some of the victims who spoke in an interview said the disease was creating a lot of discomfort for them as they always scratched their bodies due to the rashes.

They said although they had sought medical attention at various health centres, they continued to suffer from the disease, which had spread to other relatives.

A resident, Mr James Disi, said: “I am not able to sleep at night because my body always itches. I have been scratching my body and now there are sores all over it”.

Another resident, Musah Daniel Nagode, said almost everybody in the community had been infected by the disease which was very worrying, adding that “the disease is causing serious havoc because the farmers can no longer work because of how badly they itch.”

Scabies is said to be a contagious disease, which is caused by poor personal hygiene.

Symptoms of the disease include rashes, itchiness and sores.

It spreads quickly through close physical contact in a family, school or nursing home.