The Anlo Traditional Council, the Catholic Bishops Conference, the Archbishop of Accra, the National Chief Imam, the British High Commissioner, former Chief Justice Sophia Akuffo and active and retired senior officers of the Ghana Air Force are among groups and individuals who have in the past week called on former First Lady, Nana Konadu Agyeman-Rawlings and the Rawlings and allied families to commiserate with them over the sudden demise of former President Jerry John Rawlings.

Others include the Old Achimotans Association, Dr. Kwabena Duffour, the Ghana Association of Writers, Madam Samia Nkrumah and the Deputy Secretary-General of the United Nations, Amina Mohammed.

The Catholic Bishops Conference which was led by its Vice-President, Archbishop Charles Palmer-Buckle, in commiserating with Mrs. Rawlings and the family, noted that news of President Rawlings’ demise came as a shock to them. He said they were holding their annual plenary meeting at Adutor in the Keta-Akatsi Diocese of the Volta Region, when news filtered in of President Rawlings’ demise.

“Since that Thursday we have been praying for the repose of the soul of former President Jerry Rawlings. All the bishops who attended the conference have promised to carry the family in their prayers,” Archbishop Palmer-Buckle disclosed.

Deputy Secretary-General of the United Nations, Madam Amina Mohammed who called on the family on Monday November 16, also expressed her organisation’s heartfelt condolences to the bereaved family. Madam Mohammed who was accompanied by Dr. Mohammed Ibn Chambas, the Secretary-General’s Special Representative for West Africa and the Sahel, Madam Hanna Serwaa Tetteh, Special Representative of the Secretary-General to the African Union and Charles Abani, Resident Coordinator for Ghana, said she was in Mali with her team when news broke of the loss of the former President.

Madam Mohammed spoke of the enormous contributions former President Rawlings had made to Ghana and the continent and said she made it her responsibility to call on the family immediately she arrived in Ghana to console Mrs. Nana Konadu Agyeman-Rawlings, her children and the bereaved family.

The National Chief Imam, Sheikh Nuhu Sharabutu, who also called on Mrs. Rawlings and the family on Monday, prayed for the soul of the former President and also sought peace and succour for the bereaved family.

Sheikh Aremeyaw Shaibu, who spoke on behalf of the Chief Imam, said the agony and pain of the loss of the former President is unbearable. He expressed the deepest sympathies of the delegation to former First Lady, Nana Konadu Agyeman-Rawlings and her family for the loss. He described Flt Lt Rawlings as an inspirational, determined, charismatic and iconic leader who had made the most significant contributions in Ghana’s recent political development. He recalled some of the ideals the former President stood for – probity, accountability, justice and freedom. He prayed for the strength of heart, spirit and mind for the family to overcome the burden of the huge loss.

Sheikh Sharabutu was accompanied by several eminent Muslim leaders, including a large representation from the Council of Zongo Chiefs.

On Tuesday a joint group of the Pan African Writers Association and the Ghana Association of Writers called on the family to express their sadness at the demise of former President Rawlings and console Mrs. Nana Konadu Agyeman-Rawlings, the children and the family. Led by former Minister under the Rawlings regime, Kojo Yankah, the delegation said:

“At the appropriate time we will write our tributes and we will ensure that we pay due respect to a man who tested Ghana, who tried Ghana and who at this moment has put Ghana on fire.”

The British High Commissioner, Iain Walker, visited the office of former President Jerry Rawlings on Thursday to express his “heartfelt condolences” and that of the United Kingdom to former First Lady Nana Konadu Agyeman-Rawlings and the Rawlings family. He stated that the former President had left quite an impression on him during their few encounters since he arrived in Ghana as High Commissioner.

Ambassador Walker said he had heard so much of the departed leader prior to coming to Ghana and commended him for the transition from the PNDC era to the Fourth Republic. He said it was an admirable legacy as the country had since maintained a stable climate which has allowed for development. He recalled the warm relations President Rawlings had with successive UK governments as well as the royal family, referring to the warm relationship Prince Charles developed with him during his visits to Ghana.

A delegation of retired Air Force Commanders and active Air Force Chiefs also visited the Rawlings family on Thursday to console the family of their departed Commander-in-Chief and colleague in the Ghana Air Force, Flt Lt Jerry John Rawlings. The retired delegation was led by Wing Commander Sorbordjor with the serving officers led by the Commander of the Air Force Base in Accra, Air Commodore Joshua Mensah-Larkai.

Wing Commander Sorbordjor recalled the last visit to commiserate with the family over the loss of Madam Victoria Agbotui, mother of the former President, and stated that they received news of their former colleague’s death with shock.

“None of us thought that we will be back at the same place to perform the same duties within a short time. Your husband was nurtured by the Air Force so it is only appropriate that we should be here to mourn with you,” he stated.

President Kufuor on his part said he had received news of the sudden death of President Rawlings with shock. He consoled the family for the unexpected and tragic loss. He recounted with nostalgia the first time he met the then young Air Force pilot, Flt Lt J.J. Rawlings during the late 1970’s at a mutual friend’s social event. He recollected how he was taken in by his passionate desire to see a change in what he also agreed was the maladministration of the Acheampong regime. He said he was therefore not surprised when he found out that President Rawlings had led a revolt against the SMC II regime.

He further narrated events that according to him led to the tempestuous relationship between him and the former President. Even in the midst of that stormy relationship he mentioned that President Rawlings had sent him a hilarious message through his son three weeks ago when he had sent him to extend his sympathies to President Rawlings on the passing of his mother. The message was that he (Rawlings) had called a truce because he was bereaved but hostilities between them would resume right after the burial of his mother.

He acknowledged that President Rawlings deserved to be accorded the highest honor of a state burial for his immense contributions to the nation. 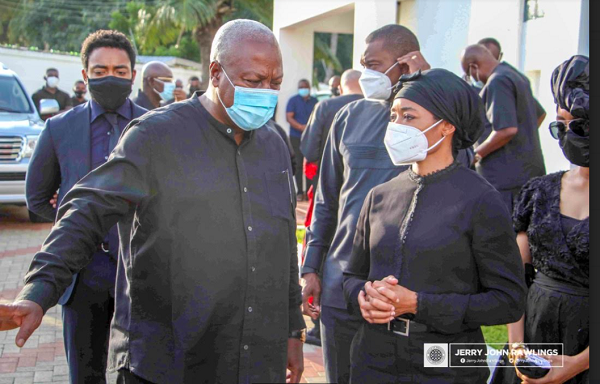 Former President John Mahama has called for a nexus between the family, the National Democratic Congress (NDC) and the state to give a befitting send-off to the late former President Jerry John Rawlings.

The leader of the NDC in receiving a delegation of the Rawlings family on Monday, said while appreciating that the state has to play a leading role in the funeral rites of the former President, it has to be duly noted that that President Rawlings was not flamboyant, did not like pomp and pageantry “and so I am sure the family will guide the state on how all the arrangements are made”.

Former President Mahama noted that President Rawlings will be celebrated by many people, that’s why the party might also be organizing events in his name to celebrate who he was.

“We are here purposely and mainly to fulfil the customary tradition of informing President Mahama of the sad passing away of his colleague and brother, the late President Jerry John Rawlings.

“We have come in the name of the Agbotui, Agyeman and allied families. Consultations are taking place on the funeral rites and we will convey decisions once taken to you,” Ambassador Gbeho noted. 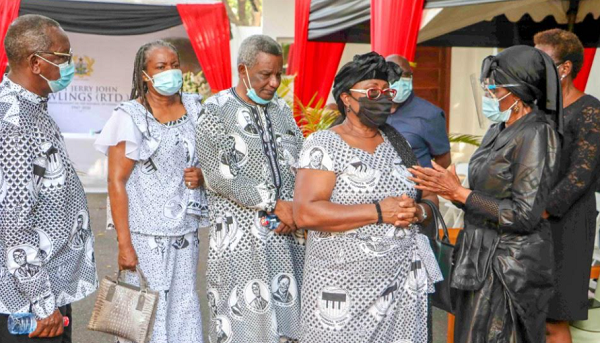 Earlier in the week a delegation from the family of former President Rawlings comprising Ambassador Victor Gbeho, Col. Joshua Agbotui, head of the Agbotui family, Dr. Zanetor Agyeman-Rawlings and Kimathi Agyeman-Rawlings amongst others called on the Anlo Traditional Council to officially inform them of the painful passing of their son H.E. Flt Lt Jerry John Rawlings.

Speaking on behalf of the delegation Ambassador Victor Gbeho apologized and explained circumstances that led to the delay in the formal announcement of the sad news to the Anlo Traditional Council.

The Awadada of the Anlo State, Agbesi Awusu II warmly received the delegation on behalf of the Anlo Traditional Council. He expressed disbelief at the sudden passing of their son since they had only three weeks early on supported the former President and the Agbotui family to bid farewell to his mother. According to him members of the traditional council had also heard the breaking news which had gone viral after the unfortunate incident. He however added his apologies to that of the Rawlings family and appealed to the Traditional Council to accept the unqualified apology. The war lord of the Anlo state consoled the Rawlings family and urged them to remain strong in these difficult moments.

He reminded the delegation that the former President was also installed the Nutifafa Fiaga of the Anlo state therefore there was the need to incorporate the necessary customary rites performed for royals during the planning of the final funeral rites.

Ambassador Gbeho on behalf of the Rawlings family thanked the traditional council for the fruitful deliberations.

The Anlo Traditional Council returned the courtesies accorded them by the Rawlings family when they called on the family in Accra on Friday to commiserate with Nana Konadu Agyeman-Rawlings and the entire family.

The traditional council pledged to lend their support to the family through the entire period of mourning as they organize a befitting burial for their eminent statesman.