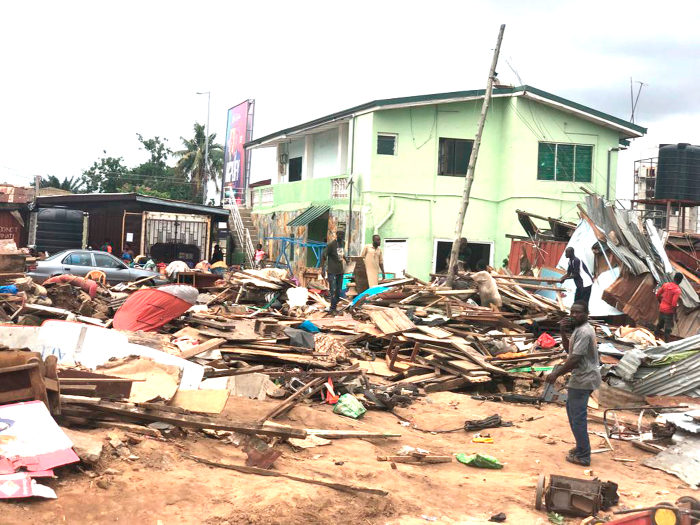 A scene at one of the demolition sites. Picture: Emmanuel Ebo Hawkson
30.5k Shares

A task force, made up of officials of the Ghana Grid Company (GRIDCo), the police and the military yesterday demolished structures under some high-tension lines in the Ayawaso West Wuogon Municipality in the Greater Accra Region.

The exercise, which started around 5 a.m, affected wooden structures serving as makeshift homes for squatters, kiosks and other structures used by mechanics and other artisans for their business operations.

At one of the demolition spots near the Bawaleshie Basic School, scores of squatters frantically scrambled to salvage what was possible amid wailing as they counted their losses.

GRIDCo, in a press statement signed by the acting Head of Corporate Communications, Bernard Kwabena Gyan, and released yesterday, said the exercise was necessary to get rid of encroachers whose activities posed a threat to transmission towers and life.

It said it was an offence for persons or institutions to conduct any form of activity in relation to the lands around the location of power transmission lines and towers in Ghana.

The statement also reiterated GRIDCo’s commitment to collaborate with relevant state institutions to remove property and structures identified as illegal human activities within its Right-of-Way to protect public safety and ensure the reliability of power transmission.

Some of the squatters, however, accused GRIDCo and the authorities of not being truthful about the real reason for the demolition.

They claimed the place was being demolished to make way for car dealers to use for their business.

An auto electrician, who gave his name as Asiedu, said although the squatters were aware of the health risks associated with the high tension lines, they had no option but to continue to ply their trade there due to lack of funds to rent at other places.

Another squatter, also an auto mechanic, Philip Osei, said although they had no right to be on the land, it was necessary that the government conducted the exercise with a human face.

A lottery operator, Osei Gyawu, 62, who had been operating business on the land for the past 22 years, said he expected the task force to give them a relocation notice to enable them to prepare although he agreed with the reasons the task force gave for the exercise.