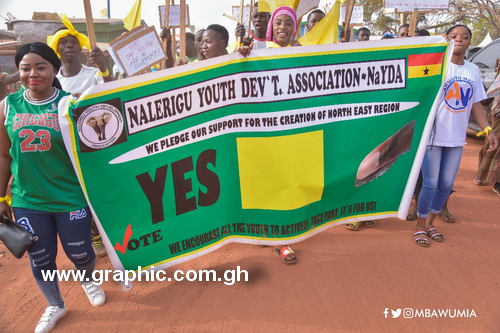 The Coalition of Domestic Election Observers (CODEO) has asked the Electoral Commission (EC) to urgently investigate the extremely high incidence of manual verification at various polling stations during the referendum to create six new regions.

CODEO also want the EC to investigate “the extremely high voter turnout figures in some polling stations”, a situation the Coalition says constitutes anomalies that “raise serious questions about the integrity and credibility of the polling process in the observed polling stations.”

CODEO’s concerns are contained in preliminary findings it issued on Friday evening, and said overall, the referendum took place in a calm and peaceful electoral environment.

According to CODEO, the investigation must be done swiftly and the outcomes communicated to the public to promote electoral transparency and integrity, calling on the EC and the Inspector General of Police to ensure that any person, including electoral officials, found to have violated the electoral laws face the full rigors of the law.

“Until individuals are held criminally accountable for their actions, it will be difficult to deter the rampant violations of electoral laws which risk undermining Ghana’s hard worn democratic stability”, it said.

Eligible voters in parts of the country earmarked for the new regions went to the polls on Thursday, December 27, to vote in a referendum to indicate their agreement or rejection of the proposal.

The Electoral Commission has declared massive endorsements of the exercise in all the six new regions.

CODEO PRELIMINARY FINDINGS ON OBSERVATION OF THE DECEMBER 27, 2018 REFERENDUM

On Thursday, December 27, 2018, the Coalition of Domestic Election Observers (CODEO) deployed fifty (50) observers to various districts and constituencies in selected regions within which the referendum on the proposed creation of additional regions was taking place. CODEO observers visited an average of four (4) polling stations within their assigned districts in the course of the polling exercise. Observers spent between an hour and two hours at each polling station visited. Overall, the referendum took place in a calm and peaceful electoral environment. However, a number of electoral anomalies were recorded by CODEO Observers during the observation exercise. These anomalies raise serious questions about the integrity and credibility of the polling process in the observed polling stations.

Below are key findings from CODEO's observation:

Below are some examples of polling stations where such high numbers of manual verification were observed:

At other polling stations, however, the percentage of voters manually-verified ranged from as low as 0% to 5%.