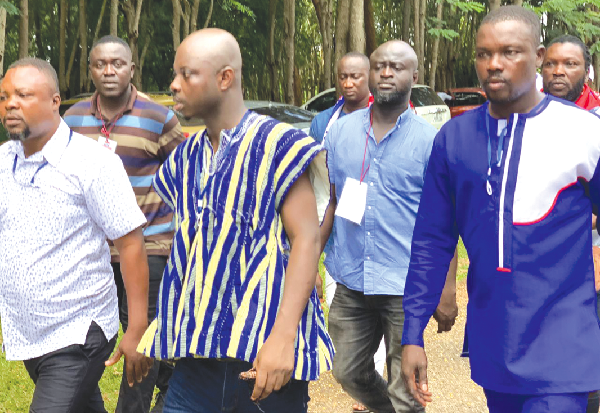 The Bono Regional conference of the New Patriotic Party (NPP) last Sunday was not without drama. What started as a smooth exercise at the Catholic Pastoral Centre in Sunyani later turned chaotic after delegates from nine out of the 12 constituencies had exercised their franchise.

Officials of the Electoral Commission (EC) denied delegates from the three remaining constituencies, Sunyani East, Jaman South and Dormaa Central due to a court injunction served on the EC by some aggrieved members of the three constituencies.

As a result, officials of the EC folded up their ballot box booths and took away the boxes for the counting of the ballots after nine constituencies had finished voting.

It took the swift intervention of the police who formed a barricade to prevent angry delegates from going up to the rostrum to destroy the ballot boxes.

In the melee, the Chairman of the Election Committee, Kwabena Oppong, announced that the committee had not been served with any injunction and assured delegates from the three constituencies that they would be allowed to vote.

"I cannot disenfranchise anybody and perpetuate an illegality. Delegates from the three constituencies will vote", he stated.

"When the EC finishes counting its votes, we will add what we get from the three constituencies before declaring the results".

He therefore asked members of the election committee to act as electoral officers for the delegates from the Sunyani East, Jaman South and Dormaa Central constituencies to begin the voting process.

With this, new electoral materials, including ballot box booths and ballot boxes embossed with the positions being contested for, were immediately brought in for voting by the three constituencies to begin.

Officials of the EC stayed glued to the podium under the protection of the police to count the votes of delegates from Sunyani West, Berekum East, Berekum West, Jaman North, Banda, Tain, Wenchi Dormaa East and Dormaa West.

The outcome of the election thus had to be decided through the combination of results of two elections organised by officials of the Electoral Commission and the Bono Regional Election Committee of the party.

There were two declarations of results, one by the EC and the other by the Regional Election Committee headed by Kwabena Oppong.

In the end the incumbent Regional Chairman, Kwame Baffoe, popularly known as Abronye DC, retained his position by defeating his challenger, who was also the incumbent regional organiser, Rasheed Konlaabig, by 173 votes to 84.

It is interesting to note that all those who won the EC organised polls also won the one conducted by the party's election committee.

Beside the drama which characterised the exercise, organisation of the election was excellent as only delegates, observers and those accredited gained access to the serene compound of the Catholic Pastoral Centre.