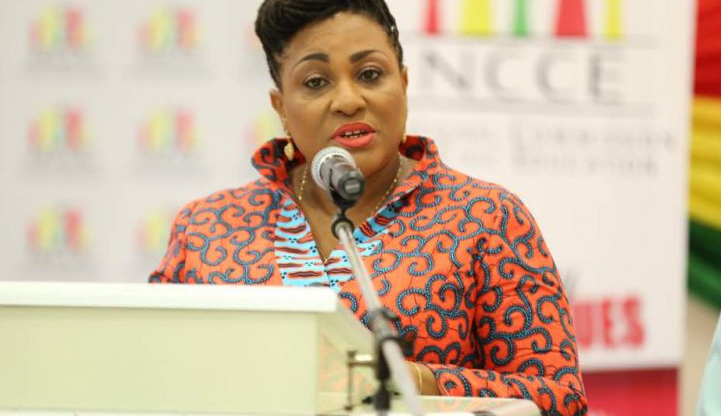 The Chairperson of the National Commission for Civic Education (NCCE), Ms Josephine Nkrumah, has stressed the need for coordination and collaboration among security agencies, community and religious leaders and the citizenry to prevent any threats of terrorism and violent extremism in the country.

She said such collaboration would also help prevent border communities from becoming fertile grounds for the activities of extremists and terrorists.

Ms Nkrumah made the call at the second national dialogue on peace and preventing violent extremism in the country in Accra.

The dialogue, which was on the theme “Peace and Social Cohesion in the context of Violent Extremism", was to create awareness of how to identify early warning signals of violent extremism, peacebuilding mechanisms and measures to counter radicalisation of the youth.

It was a follow-up to a research conducted by the NCCE to study the riskand threat of violent extremism in 10 border regions of Ghana in 2020.

The research established unemployment, porous borders and poor surveillance as the major factors that made Ghana vulnerable to terrorist attacks.
Organised by the NCCE, with support from the European Union (EU), it formed part of a project titled "Preventing Electoral Violence and Providing Security to the Northern Border Regions of Ghana (NORPREVSEC)".

Ms Nkrumah called on the security agencies to treat all complaints from citizens, especially at the border towns, with respect as part of efforts to prevent terrorist attacks on the country.

She emphasised that there was the need for citizens and security agencies to collaborate following recent attacks from extremists and terrorists in neighbouring countries such as Burkina Faso, Togo and Benin and the Sahel region.

"The issue of terrorism and violent extremism are real and, therefore, Ghana needs to take the necessary steps to deal with these emerging threats", she stated.

Ms Nkrumah said as part of protecting, responding and preventing terrorism and violent extremism activities, the NCCE had intensified its role of educating the public on the need to be vigilant of the activities of such extremist groups.

In their contributions, panellists said terrorists and extremists were not only external forces but also there were those within the communities who took advantage of the vulnerability of the youth to indoctrinate them with their radical ideologies.

They, therefore, called for an improved citizens-security agencies relationship to prevent any threats of extremism within the country.

They were also of the view that terrorists and extremists activities were not only rampant in border areas but could be found in slums and hard-to-reach areas within the country.

Mr Abdallah in his submission stated that the universities and cyber space were some of the places prone to the radicalisation of extremist ideologies.

He called for heightened awareness creation among the youth to help safeguard the country's cyber space and the campuses of the various universities to prevent radicalisation.

For her part, Ms Mohammed called for the inclusion of the youth in decision-making processes at all levels to let them feel part of the governance system.
Col Dr Ba-Taa-Banah called on citizens to work hand in hand with the security agencies to deal with the threats posed by terrorists and extremists.