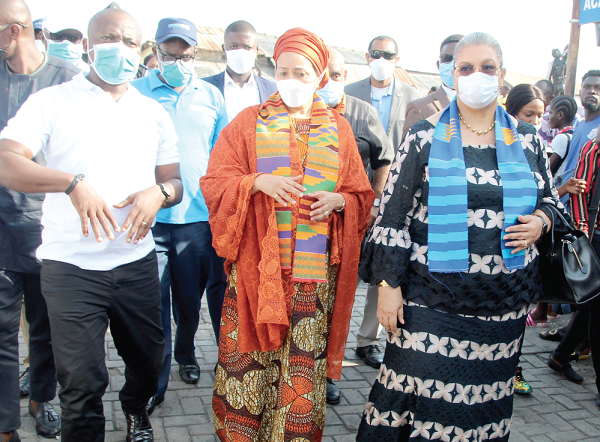 Mr Mohammed Adjei Sowah (left) with Ms Amina Mohammed (middle) during the tour at Jamestown. With them is Ms Hanna Tetteh (right), Special Representative of the Secretary-General to the African Union. Picture: ESTHER ADJEI
30.5k Shares

The Deputy Secretary-General of the United Nations (UN), Ms Amina Mohammed, has stated that as Ghana is about to have its general election this year, the international community looks up to the country to go through peaceful elections and transition that will reflect the voting aspirations of Ghanaians.

She said the Electoral Commission had good track electoral record and commended the commission for the smooth electoral processes it had been undertaking.

She, however, called for an enabling environment to be given to the commission to operate and ensure the conduct of free and fair elections.

“We also had constructive discussion about the Peace Council that has been inaugurated and as UN we are supporting programmes at the grass roots to facilitate dialogue,” she said.

The Deputy UN Secretary-General stated these when she addressed the media in Accra.

Ms Mohammed was on a two-day visit to the country to support efforts towards the implementation of the Sustainable Development Goals, including financing for development, COVID-19 socio-economic response and recovery and regional cooperation among West African countries.

She was accompanied by the former Minister of Foreign Affairs, Mrs Hanna Tetteh, and the Special Representative of the Secretary-General and Head of the United Nations Office for West Africa, Dr Mohamed Ibn Chambas.

Ms Mohammed stated that Ghana unlike other countries burdened with conflict had microeconomic issues that had been exacerbated by the COVID-19 pandemic.

She expressed worry that although the country had made some strides in implementing various programmes and actions to achieve the Sustainable Development Goals (SDGs), Ghana was still far away from achieving those goals.

She stated that she and other top UN officials had discussion with President Nana Addo Dankwa Akufo-Addo in his capacity as the Chairman of ECOWAS about peaceful conduct of elections in the sub-region as well as microeconomic responses that were needed such as stimulus packages needed to fill the liquidity gaps due to the impact of the pandemic.

Ms Mohammed said the discussion had also focused not only on how to bring debt relief but also how to bring private sector financing to countries in the sub-region like Ghana in the areas of agribusiness, technology transfer, among others.

She added that she also met with the international community to seek their inputs on how things could be done better and the best ways to leverage resources for Ghana to bolster economic growth in the country.

Expressing grief over the passing of Ghana’s former President, Mr Jerry John Rawlings, she said the international community recognised the former President as “a leader in the world and in Africa even though he is the son of the soil here”.

“We express our deep condolences to the country and his family,” she said.

Ms Mohammed embarked on some inspection tour to three project sites which are being implemented by the UN.

The sites were the Adabraka Polyclinic, the UN Habitat Participatory Slum Upgrading Programme (PSUP) and the World Cafe in James Town.

At the PSUP, an initiative of the African Caribbean Pacific Secretariat which is financed by the European Commission and implemented by UN-Habitat, the Deputy General Secretary interacted with some individuals who were undergoing various training programmes and encouraged them to aspire to achieve greater heights.

At the World Cafe, she had an encounter with some persons living with HIV and disabilities.

During the interactions, she gave them hope and inspiration while encouraging them to look beyond their challenges and strive to reach their fullest potential. #GhanaVotes2020