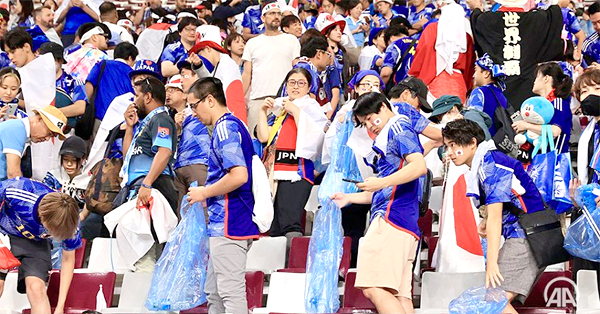 Some Japanese football fans cleaning the stadium after a match at the 2022 FIFA World Cup
30.5k Shares

Japanese football fans made a great impression at the ongoing 2022 FIFA World Cup despite their inability to qualify to the quarter-finals.

Their cleanliness went viral on all social media platforms. A lesson worthy of emulation by all Ghanaians.

They made news by showing the world the essence of cleanliness and the discipline it takes to adhere to it. Their emphasis on being clean within their inner man and physically has paid off to the extent that they attracted mostly positive comments from observers across the globe. For instance, Scott Stump wrote about them in his article titled: “Japan’s soccer fans clean up stadium after thrilling upset win in World Cup.”

The international soccer governing body — FIFA— also tweeted, "Huge respect to these Japanese fans." Yes, Japanese soccer fans earned respect for their attitude of cleanliness despite not winning the cup. How they arrived at their current state of behaviour and how their example of cleanliness can be employed to counter corruption is the focus of discussion in this article.

Cleanliness, according to Merriam-Webster.com Dictionary, is the quality or state of being clean: the practice of keeping oneself or one’s surrounding clean. Cleanliness, in the perspective of this article, covers both oneself and one’s surroundings. All acts of corruption can be deemed unclean behaviour. Therefore, to be clean simply means to be unsoiled of corrupt acts, fresh (smell good or look appealing) and hygienic (sanitised). People who are ethically and environmentally clean enjoy several benefits.

Cleanliness promotes good health, saves money that could have been used for medical bills, promotes peace and tranquility, unites people because it takes people in communities to work together to keep it clean, and commands respect (observers cannot help but respect and appreciate the hard work invested to maintain the clean environment). Cleanliness does not come easy; it takes attitudinal change that results from selfless effort, hard work, discipline, resilience, determination, respect for one another and focus.

A critical look at the filth in most of our communities in Ghana makes one wonder if Ghanaians care enough about the benefits derived from cleanliness, as well as the need to take the right actions against uncleanliness as existing measures have barely yielded any results. We litter our beaches, pollute our water bodies and most of our commercial vehicles are rickety and dirty.

In addition, our roads and walkways in our communities are littered with garbage, gutters choked and stinky despite the two major religions’— Christianity (71.2 per cent) and Islam (19.9 per cent) — doctrines about the importance of cleanliness as explicitly stated in the Holy Bible and the Holy Quran. Of what use are our daily prayers uttered in filth if the God we serve cannot stand filth? What benefits do corrupt individuals gain from the monies accrued from corruption and donating to their places of worship apart from satisfying their egos?

According to Amy Chavez, the Japanese cultivated a culture of cleanliness with the notion that ‘clean is good’. It all starts from early childhood where children are taught to clean up after themselves in schools and their environments as specified by their religious practices. Amy, in her perspective, listed eight reasons why Japanese adhere to their culture of cleanliness. First, they take responsibility for their own mess by disposing of garbage in their homes no matter where the filth is created. Second, trash bags are made available in all shops for shoppers to use to gather their trash for disposal at home. Third, there are no street cleaners; workers clean their offices. More so, there are designated places where inhabitants dispose of trash.

Further, there are volunteer organisations that create public awareness of the essence of cleanliness with the notion/slogan, “Clean it up before it becomes noticeable.” Also, they have an immaculate transport system where rules of cleanliness are strictly adhered to. In addition, construction, cement-making and dirt-hauling trucks are kept very clean with drivers taking pride in their tidy-looking vehicles. White-gloved taxi drivers polish their cars after every passenger drop-off. Lastly, there are routine semi-mandatory community cleanup activities organised in neighbourhoods.

The above-listed actions are taken by the Japanese to make their cities clean. They live according to the tenets of their religious beliefs. Their character, developed out of their disciplined nature, determination, resilience, constant practice, self-sacrifice, hard work, coupled with political will have yielded positive results.

More so, Japan is known to be a relatively less corrupt country and a viable business environment. Thus, it is important for us to emulate the attitude of the Japanese and allow our belief systems that promote cleanliness to be engraved on the tablet of our hearts so we can also make our cities spotless, reduce corruption and earn respect.

The writer is a lecturer at Ashesi University, Accra.