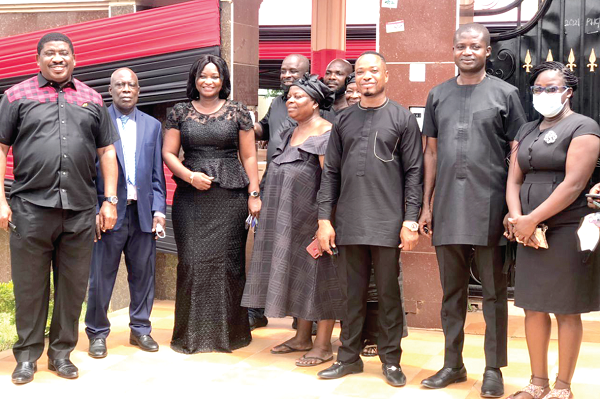 Mrs Assan signed a book of condolence opened for the late Benyiwa-Doe by her family last Tuesday, September 28, at her East Legon residence in Accra.

She was accompanied by the Chief Director of the Regional Coordinating Council, Mr Kingsley Agyei Boahene, and the Gomoa West District Chief Executive, Mr Bismark Baisie Nkum, as well as some staff of the RCC.

In a brief remark, Mrs Assan described the late Benyiwa-Doe who was the first woman in the Fourth Republic to occupy the position of Central Regional Minister as a fearless and courageous woman who served the region very well during her tenure.

She noted that Mrs Benyiwa-Doe left behind a long-lasting legacy which could not be erased in the history of the region, saying “indeed, our late mother’s courage and style of doing politics encouraged many women to defy all odds to enter politics to make their voices heard in the governance of the country”.

She said “Mrs Benyiwa-Doe’s stewardship as a regional minister paved the way for me to rise through the ranks to occupy the same position today”, noting that “she was really admired by many people irrespective of their political affiliations, and her passing is a great loss to the region and the country”.

Mrs Benyiwa-Doe passed on at the International Maritime Hospital in Tema in the early hours of Sunday, September 19, 2021.

The late National Democratic Congress (NDC) stalwart was born Comfort Saah in 1948, and hailed from Gomoa Abora in the Gomoa West District in the Central Region.

She was sponsored by the Provisional National Defence Council (PNDC) led by late President Jerry John Rawlings to attend the M.I. Kalilin Political School, Cottbus in the then German Democratic Republic.

After completion she returned to become an active member of the PNDC and the 31st December Women’s Movement.

She served as a deputy minister of Mobilisation and Social Welfare under the Rawlings administration from 1992 to 1996 and served as a three-time Member of Parliament for the then Gomoa Constituency from 1992 to 2004.

She further served as the National Women’s Organiser of the NDC and rallied many women towards the NDC’s victory in the 2008 general election.

In 2009, late President John Evans Atta Mills appointed her as the Central Regional Minister. In 2013, during the tenure of former President Mahama, she served as a member of the Council of State.