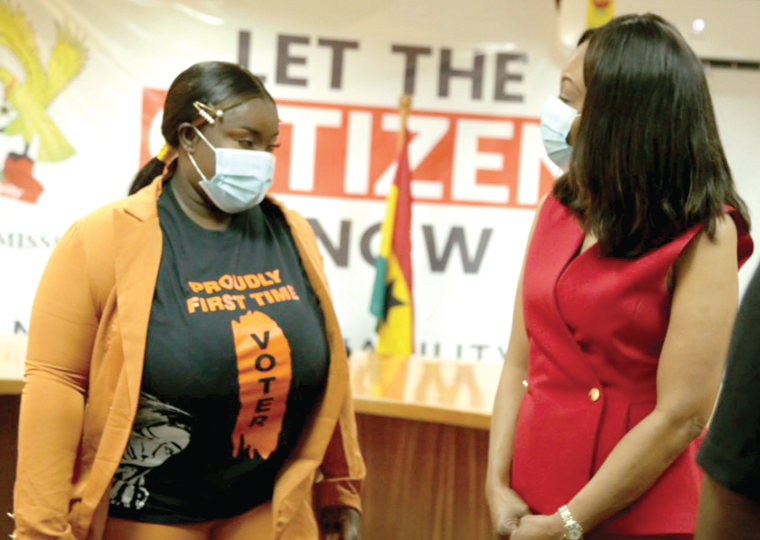 Mrs Mensa (right) interacting with Ms Benson after the meeting

The Chairperson of the Electoral Commission (EC), Mrs Jean Mensa, has urged all first-time voters, especially the youth, to be agents of peace as the country prepares for its Presidential and Parliamentary Elections on December 7, 2020.

Mrs Jean Mensa noted that the destiny of the country was in the hands of the youth and their participation in the political process was key.

That, she explained, required that the youth put the interest of the country first by standing out as agents of peace before, during and after the elections.

A statement issued by the EC said Mrs Mensa made the call when she met with Youth Bridge Foundation, a youth group aimed at mobilising and building the capacity of Ghanaian First-Time Voters to ensure they made informed decisions when they went to the polls.

“We are happy that for the first time, the youth in this country are showing a keen interest in the electoral process. I urge them to review the policies and programmes of the various political parties before casting their vote.”

“I also encourage them to turn up in their numbers early on election day and vote,” Mrs Mensa added.

It said Mrs Mensa stressed the need for all stakeholders to help build the capacity of the youth to prepare them for the future.

That, she said, the youth would have a place around the table to contribute to discussions and impact positively on the nation’s development.

It said Mrs Mensa urged the youth to spend their youthful years to acquire knowledge and experience to position them for greater responsibilities.

The statement said the EC chairperson reminded the youth that the process of acquiring knowledge and experience might be gruelling but it would equip them to participate meaningfully in national affairs.

It said Mrs Mensa pledged the commitment of the EC to operate an open and transparent electoral process to ensure the integrity of the elections.

The statement said Ms Benson commended the commission’s ‘Let the Citizen Know’ series for its role in giving Ghanaians an opportunity to understand and be part of the electoral process.