Battle over Free SHS: Will it be the game changer? 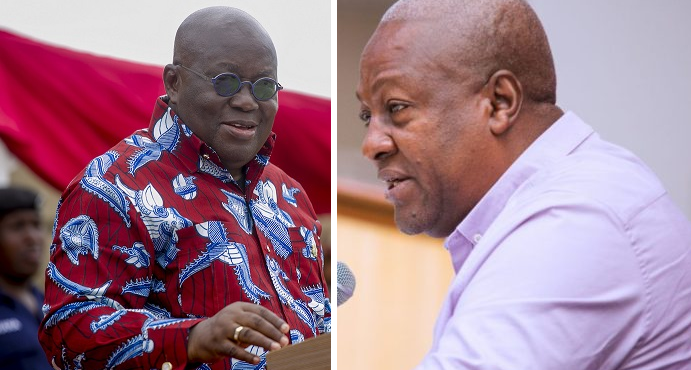 Last Tuesday, while on a tour of some constituencies in the Upper East Region, Mr Mahama stated that “we started the policy [free SHS] and the NPP came and continued it”.

But, addressing a gathering at Odorkor yesterday, President Akufo-Addo described the statement made by the former President as “something which shocked me”.

The President said when he promised free SHS in the 2008, 2012 and 2016 campaigns, “they [Mr Mahama and NDC] said that I was deceiving Ghanaians, and that it was a vote-buying gimmick and that even if it would be possible, it would take about 20 years”.

He continued: “Not long ago, he said that if he had GH¢2 billion, he wouldn’t use it to pay school fees, but rather he would use it on something profitable. Today, he says that he introduced free SHS.”

President Akufo-Addo then asked the gathering: “ Are we going to allow the former President to come back to power through lies and deception?”, to which the crowd responded with a big “no”.

The President added that the “lies” from the NDC presidential candidate “are born out of one thing, and that is, his campaign is failing to catch up with the electorate.

“He has seen that his campaign is collapsing in confusion, fabrications and now outright lies,” he said.

For residents of Odorkor in the Ablekuma North Constituency, he told them to give him and the New Patriotic Party a resounding first round victory in the presidential election, and an overwhelming majority in Parliament.

“I am looking for a massive endorsement from the people of Ghana for that blueprint which is set out in our manifesto of 2020. So, this year, I am pleading with you, I don’t want it in ‘boom’. but I want it in ‘boom! boom! boom!,” President Akufo-Addo added, to cheers from the crowd.

President Akufo-Addo further said former President Mahama was going round the country making all sorts of promises, forgetting that he was not a new character in the presidential election.

He said the former President was shown the exit in 2016 due to his abysmal performance.

He said Ghanaians were all witnesses to the work of Mr Mahama’s administration and were wondering why he had to make all manner of promises now.

The President asked the people to cast their minds back to what he (the President) had promised when he assumed office in 2017 and what his government had done and, based on that, vote for him, since he had been truthful.

He asked: "Have I disappointed you?" to which the crowd responded with a loud “No!!!”
President Akufo-Addo said he had built the foundation and was going to erect the structure on it for the benefit of all.

Insisting that the free SHS was his baby, Mr Mahama, while addressing a rally in Navrongo last Tuesday, accused the Akufo-Addo administration of messing up the policy reports Kester Aburam Korankye.

He said if the NPP administration had continued with the plan for a progressive free SHS, the policy would not have been saddled with the double-track system which was causing frustration for both students and parents.

"If they had listened to us and continued with our plan for the free SHS, which we started with day schools in 2015, this traffic light system could have been avoided," the former President said.

He pointed out that the Akufo-Addo administration poorly implemented the policy without consideration for the lack of infrastructure to support it and that had rendered it ineffective.

"We were building 200 new SHSs. We didn't finish all before we left but this government came and abandoned all of them. So this is what we will do: we will fast-track the completion of the 200 schools we were building, so that children can have enough vacancies in SHSs to have quality education," he said.

"I have made a promise to Ghanaians and I will repeat it here in Navrongo: within a year in office, I will abolish the double-track system," he added.

In 2015, Mr Mahama, then the President, launched the government’s progressively free SHS policy for day students.
Launching the programme at the inauguration of the first of the 200 Community Day SHSs at Ekumfi Otuam in the Central Region, he said the government had released GH¢12.2 million to enable the Ministry of Education to pay the fees for the first term of the 2015/2016 academic year.

The launch was in line with the 2016 manifesto of the NPP.

At a ceremony at the West Africa SHS in Accra, the President noted that he had made SHS education free because he knew that knowledge and talent were not for the rich and the privileged alone, adding that free education would widen the gates of opportunities for every child, especially those whose talents were arrested because of poverty.