Akufo-Addo sworn in as Ghana’s president for second term 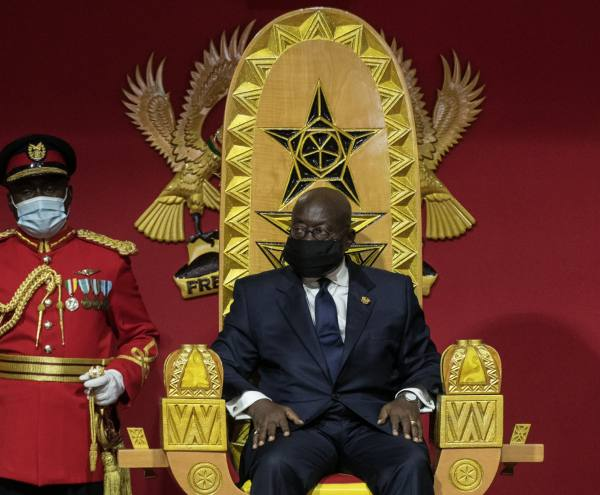 President-elect Nana Addo Dankwa Akufo-Addo has been sworn into office for a second four-year term as President of the Republic of Ghana.

The Chief Justice Kwasi Anin Yeboah conducted the swearing-in, taking him through the required oaths.

President Akufo-Addo was given the mandate to govern Ghana for the next four years from January 7, 2021, to January 6, 2025, following the declaration by the Electoral Commission (EC) that he was the winner of the presidential election held on Monday, December 7, 2020.

Nana Akufo-Addo who contested the election on the ticket of the New Patriotic Party (NPP won with 6,730,413 votes which represents 51.295 percent of the total valid votes cast.

The total valid votes cast was 13, 434,574 representing 79 per cent of the total registered voters.

The National Democratic Congress (NDC) however rejected the declaration of President Akufo -Addo as the winner of the presidential polls by the EC.

At a press conference in Accra, the Minority Leader, Haruna Iddrisu, described the declaration by the EC as flawed and one that would not be accepted by the NDC.

“We roundly reject and outrightly reject the declaration of the sitting President as the winner of the 2020 elections”, he said.

On his part, Mr Mahama said he was unwilling to accept the "fictionalized" results of the 2020 presidential and parliamentary elections declared by the Commission.

He accused the Electoral Commission (EC) of manipulating the election results.

"We will not accept anything short of a declaration of the legitimate results which points to an NDC Parliamentary majority," Mr Mahama said.

John Mahama has since challenged the victory of Mr Akufo-Addo in court claiming electoral fraud.