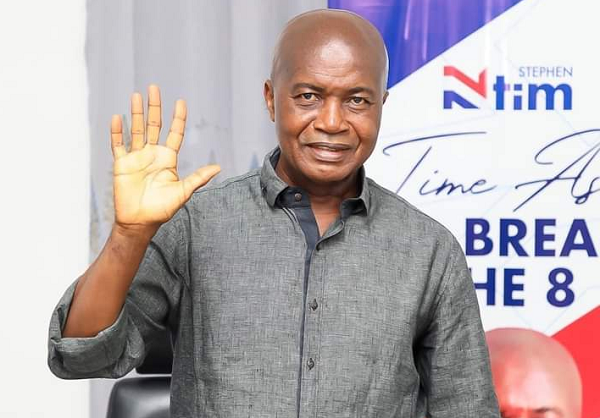 After 20 years of disappointments, heartbreaks and, as he himself put it, “wandering in the political wilderness”, Stephen Ayesu Ntim has finally been elected the National Chairman of the ruling New Patriotic Party (NPP).

He clinched a landslide victory at the party’s National Annual Delegates Conference at the Accra Sports Stadium over the weekend and immediately declared: “The new national executives will work assiduously to win the 2024 elections."

Mr Ntim, who had lost the bid for the position on four consecutive times, won it on the fifth attempt with 4,014 votes, beating his closest competitor, Stephen Asamoah Boateng, by a whopping 3,004 votes.

Meanwhile, a political tornado swept off John Boadu as General Secretary, notwithstanding the fact that 15 of the 16 regional chairmen of the NPP had publicly declared their support for him before the election.

With 2,524 votes, he lost the position to Justin Frimpong Kodua, the Chief Executive Officer of the Youth Employment Agency (YEA), who garnered 2,837 votes.

It was a classical ‘fear delegates’ punch to the former NPP scribe, who had been widely tipped to win and secure a second term.

A former First Vice-Chairman of the NPP, Mr Ntim had been yearning to accede to the topmost position in the NPP for the past 20 years, but to no avail.

This time around, his message of building a formidable NPP to win the 2024 elections, as well as his consistent pursuit of the national chairmanship, appeared to have convinced the delegates to hand over the position to him.

Wearing an all-white attire, with a sash in NPP colours around his neck, a beaming Mr Ntim walked majestically to the podium to speak to the gathering after the new executives had been sworn in by his predecessor, Freddie Blay.

He assured the party faithful of the commitment of the new national executives to work hard for the NPP to win the 2024 elections and “break the 8”, a reference to the jinx of none of the two dominant political parties ever winning a third term in office.

“The new national executives will work assiduously for the party to win Election 2024, in conjunction with our Members of Parliament and members in the Diaspora,” he told the gathering, which included President Nana Addo Dankwa Akufo-Addo and the Vice President, Dr Mahamudu Bawumia.

The elated new NPP National Chairman spoke about the immense role his campaign team, party members and the delegates played to help him clinch the victory.

“I am grateful to my supporters and the party at large for giving me a memorable 64th birthday present. It has been 20 years of wandering in the wilderness before clinching this position. I assure you that I am going to cherish the chairmanship, value it and make sure that it will be a unique and enviable position,” he said.

The delegates were made up of constituency, regional and national executives; metropolitan, municipal and district chief executives (MMDCEs), NPP MPs, Ministers of State, members of the external branches of the party and members of the NPP National Council.

The conference commenced last Friday, but the elections were held from about 6 p.m. to 12 midnight last Saturday, followed by the counting and collation of results, and ending with the declaration of results about 4:30 a.m. yesterday.

The election of the three vice-chairpersons generated some controversy, with the results being disputed, leading to the collation of results being done three times.

Kate Gyamfua retained her position as the National Women’s Organiser with 620 votes, with Hajia Sawudata a distant second with 32 votes and Ellen Ama Daaku with nine votes.