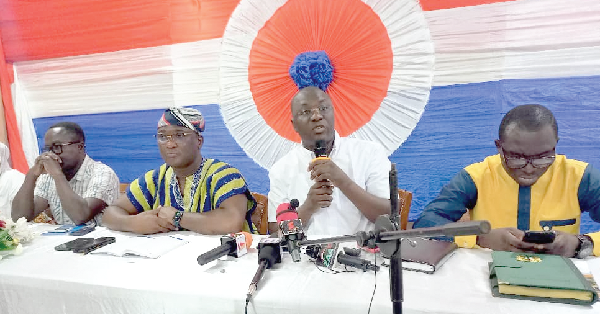 Dr Mohammed Amin Adam (2nd from right), Chairman of the Northern Region Elections Committee, addressing the media after the vetting exercise. With him are other members of the committee Follow @Graphicgh

A total of 31 aspirants have been vetted and cleared to contest the Northern Regional New Patriotic Party (NPP) executive positions.

As at close of vetting last Wednesday, no aspirant was disqualified from contesting the upcoming election.

The incumbent Regional Chairman, Mohammed Adam Bantima Samba, is slugging it out with Amadu Inusah and Ibrahim Mahama. The First Vice Chairman position is being contested by four aspirants.

The Second Vice Chairman position is being contested for by three aspirants.

Two persons are going in for the treasurer position with two others also slugging it out for the organiser position. The incumbent Youth Organiser, Mohammed Alhassan, popularly known as
Alhassan Ghana, is also facing a stiff competition from two other aspirants.

About 380 delegates are expected to converge on the Modern City Hotel in Tamale on Friday, May 27 for the regional delegates’ conference.

The Chairman of the Northern Regional Elections Committee, Dr Mohammed Amin Adam, said all the appropriate measures had been put in place to ensure a successful conference.

In order to ensure a smooth conference, he indicated that various sub-committees had also been set up to spearhead specific tasks.

He warned the aspirants against campaigning on the election day, saying it was against the party’s elections rules and that any aspirant who flouted them would face the consequence.

“The event is strictly by invitation so if you don’t have accreditation you won’t be allowed into the premises, also we don’t want to see aspirants campaigning that day because it is against the party’s constitution” Dr Amin said.

He said security would be beefed up on and around the premises to ensure an incident-free election.