Ghana commended for role in Africa 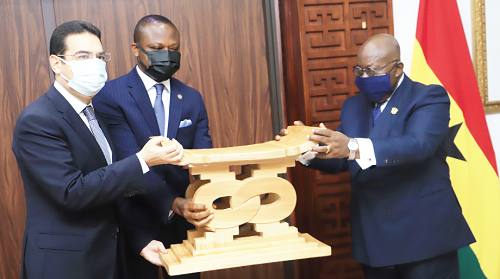 These, he explained, were evident in Ghana becoming the hub of international conferences, including the hosting of the ACFTA Secretariat and the election of President Nana Addo Dankwa Akufo-Addo as a two-term Chairman of ECOWAS, coupled with Ghana receiving the highest vote to the UN Security Council.

Mr Hanna said this when he paid a farewell visit to the Jubilee House to inform President Akufo-Addo about the completion of his three-year duty tour of the country.

Mr Hanna further commended the government and the people for the support and proverbial hospitality they offered him during his tenure which “made Ghana my home away from home. Even though I am going home, I am taking Ghana along with me”.

The ambassador also lauded the country’s health sector for “the wise measures” they took to help deal with the COVID-19 pandemic which he said had made Ghana a model for other countries.

According to Mr Hanna, the onset of the pandemic did not affect the growing relationship between Ghana and Egypt since they continued to engage in virtual meetings, visits and other progressive engagements and agreements and said such efforts would soon yield the needed results.

He said the two countries had reached a trade balance of $100 million, and that was expected to increase to about $150 million soon.

President Akufo-Addo said Ghana’s relations with Egypt had a firm foundation from the days of Ghana’s independence.

He said the collaboration between Dr Kwame Nkrumah and his Egyptian counterpart, Abdel Nasser, formed the firm basis for the future relationship of the two nations.

The President said he was still waiting for the outcome of discussions between authorities of the two nations for the establishment of a joint airline.

He said Egyptian companies were performing well in Ghana and commended the former for being a pillar of stability in a very difficult continental environment.