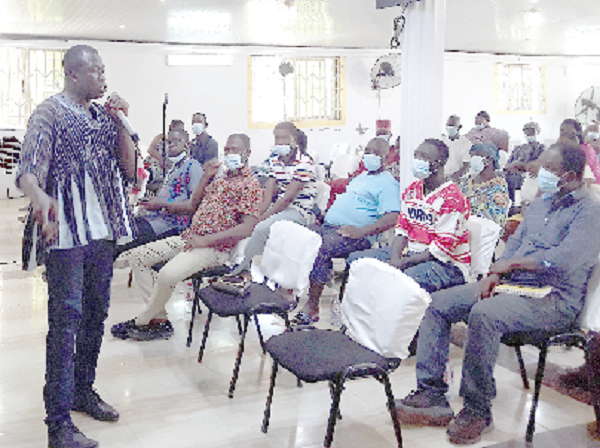 Mr Bashiru addressing the residents at the meeting Follow @Graphicgh

The Municipal Chief Executive (MCE) of the Ga Central Municipal Assembly (GCMA), Mr Mohammed Bashiru, has began a consultative forum with residents in the municipality.

It forms part of his agenda to meet different groups in the various communities to address challenges within the municipality.

In the first of such meetings with residents and landlords of Santa Maria, a community within the municipality, issues of road and storm drain construction, payment of levies, sanitation, health and education came up for discussion.

The forum also afforded the residents the opportunity to ask questions bothering them in the community and the municipality as a whole and how those could be resolved.

In his address, Mr Bashiru said there was the need for partnership in development.

According to him, much as the assembly had its role to play, the residents had theirs, and urged them not to shirk their responsibilities.

He cautioned some residents at Santa Maria who had built on a watercourse to, as a matter of urgency, remove their structures as it contributed to flooding and destruction of property.

According to him, the assembly would embark on a demolition exercise to pave way for the construction of a storm drain that had stalled due to the structures.

Even though no particular date has been fixed yet for the exercise to begin, Mr Bashiru said the construction of the storm drain had already begun but the contractor had to stop at a point due to the situation.

“There are some structures that need to be pulled down before the contractors can continue from where they have stopped.

That is why we have met all of you to explain what we intend to do and seek your views about our actions.