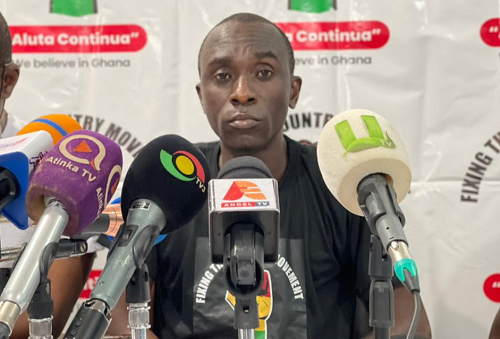 A pro New Patriotic Party (NPP) group, ‘Fixing The Country Movement’, has commended the Ghana Police Service for its swift response in the handling of the missing but found Takoradi pregnant woman.

The group also wants the police to expand its investigations further to uncover all those involved in the alleged kidnap case of the 28-year-old Josephine Panyin Mensah.

The group at a press conference in Accra on Sunday afternoon, September 26, 2021, claimed that that the alleged Takoradi kidnapped pregnant woman’s case was staged to make the ruling government unpopular by some criminal elements within the opposition political parties.

It will be recalled that Josephine Panyin Mensah, said to be 28-years-old and was said to be nine months pregnant, reportedly went missing after going for a routine dawn walk on Thursday, September 16, 2021.

She is a resident of Takoradi in the Western Region.

Her husband, Paul Simmons reported the incident to the police and later said his mother-in-law had received a phone call from a suspected kidnapper demanding a ransom.

The police in Takoradi started investigations into the circumstances that led to the missing of the said pregnant woman.

Josephine, according to the husband left home that Thursday morning around 5am for a routine dawn walk and did not return.

On Tuesday, September 21, Josephine was found around Axim in the Western Region. Even though she was said to be nursing a near term pregnancy, she was without the pregnancy or the baby when she was discovered near a church building in Axim.

A further police investigations into the issue has led to Josephine confessing that she was never pregnant or kidnapped and that she feigned her pregnancy and the kidnapping story.

The Founder of Fixing The Country Movement’, Mr Ernest Kofi Owusu Bempah, said the swift response by the police into the case is what has led to the discovery that the victim, Josephine Panyin Mensah, faked her pregnancy and kidnapping story.

“As it were, the police response to the matter has been very swift, and it is no surprising that the pregnancy and the kidnapping turned out to be a fraudulent hoax,” he noted.

He added, “We call on the Inspector General of Police (IGP) to cast his investigative tentacles wider to ensure a criminal investigation process is activated in a prompt and impartial manner to fish out all the NDC politicians behind.”

Mr Owusu Bempah was of the view that prior to the 2020 elections, the Chairman of the opposition National Democratic Congress (NDC), Samuel Ofosu Ampofo, in a leaked tape made some comments of capturing people and keeping them in hostage, and therefore he could be questioned for Josephine’s case.

He therefore wants the police to extend its investigations to the NDC’s National Chairman.

He said Josephine ought to be punished for what she did in order to serve as a deterrent for others with similar motives.

“Criminal misdemeanour should be accorded the seriousness it deserves by allowing the criminal justice system to interpret and assess its social impact and apportion punishment as prescribed by law,” Mr Owusu Bempah noted.

He added, “The impression of impunity may encourage others to take the same route and it may ultimately lead to the destruction of the fabric of the State.”