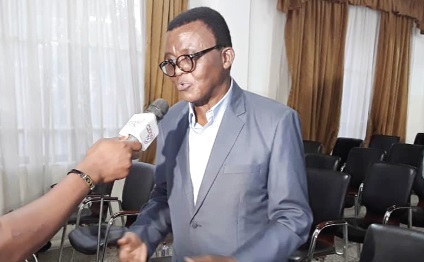 A Former Senior United Nations Governance Advisor has called for a review of how persons are appointed to serve on the Electoral Commission.

This, according to Professor Baffour Agyeman-Duah, would give a real meaning to the independence and autonomy of the EC, as well as help the country avoid a future violent conflict, particularly during elections, and subsequently threats to its internal security.

He said that consideration was part of a broader review of the 1992 Constitution and suggested that instead of EC commissioners being appointed by the President, a 15-member ad hoc Elections Authority should be assigned that role.

Professor Agyeman-Duah made the call in his paper delivered at the fifth edition of a National Security Seminar organised by the Centre for Peace and Security Research of the University of Professional Studies (UPSA) in Accra last Wednesday.

Speaking on the topic: “Elections and Governance in West Africa: trends and lessons for Ghana", the governance expert said: “The appointive powers of the Ghanaian President, relating to the EC, is one area to be concerned about, as the country seeks to build a stable, peaceful democratic state and avoid the potential insecurity it would generate.”

The Seminar is a key component of the Master of Arts course in Peace, Security and Intelligence Management (MPSI) at the UPSA.

It was attended by some governance experts, members of some civil society organisations (CSOs), lecturers and students pursuing Master of Arts course in Peace, Security and Intelligence Management at the UPSA.

The students, after the presentation, asked a wide range of questions, including peace in the subregion and its implications for Ghana.

Suggesting who should appoint commissioners to the EC, Prof Agyeman-Duah, who is a co-founder of the Ghana Centre for Democratic Development (GCDD), said the appointing authority should be composed of key stakeholders, including, but not limited to, representatives of the National House of Chiefs, the corporate world, the Trades Union Congress, academia, religious bodies, identified prominent and accomplished individuals and civil society groups.

He stressed that recruitment for the positions should be advertised, competitive and through the Public Services Commission, which would present the top three candidates to the Authority for interviews and final selections.

“Such a process will ultimately produce a truly independent and credible EC as the country seeks to build a stable and peaceful democratic state.

Prof Agyeman-Duah, currently the Chief Executive Officer of the John A. Kufuor Foundation, pointed out that there seemed to be some loose ends in the appointment and dismissal of EC Chairpersons.

“As it stands, Article 43(2) of the 1992 Constitution empowers the President to appoint the Chairman and other members of the EC, with the only caveat of acting in consultation with the Council of State,” he noted.

He further explained that the chairman, who is placed on the same level as a Superior Court Judge, could also be removed upon a petition to the President, who acted as a “conveyor belt” and had to simply pass on the petition to the Chief Justice, who, in turn, would set up a committee.

“The CJ sends the report of the committee to the President to act on the recommendations. This is the laid down constitutional procedure for removing the EC chair, and this is exactly what was used to displace Charlotte Osei in June 2018,” stated.

He expressed worry that when the government changed, the same constitutional procedure could be employed to effect leadership changes at the EC.

While admitting that no President could be faulted for following the legal procedure to achieve his goals, Prof. Agyeman-Duah emphasised that “it appears a bad precedent has been set with the dismissal of Charlotte Osei, and should the NDC one day also decide to trigger a similar process, it will turn EC appointments into political football and the body will lose its independence and credibility. The consequences of such an eventuality could be devastating for our electoral democracy”.

He, therefore, indicated that to avoid that situation and the potential insecurity it would generate for the country, he was advocating “a change in the mode of appointment of the EC as part of the wider constitutional reforms I call for”.

The Co-founder of the GCDD expressed optimism that changing the mode of appointment of EC commissioners could restore greater confidence in “our electoral democracy and blunt the mistrust and suspicions that characterise our elections, and by so doing, the need for militarising or weaponising Ghanaian elections will be minimal, if not negated”.

The governance expert further called for greater transparency by upgrading the Inter-Party Advisory Committee (IPAC) that included all political parties and relevant civil society groups to help build confidence in the electoral process.

The schedule for IPAC should also be regularised and formalised.

According to him, the country’s sovereignty and territorial integrity were assured in the dynamics of sub-regional politics, although the recent rise of Islamic extremism and violence in the Sahel seemed to have changed the dynamics, since instability in neighbouring countries threatened the peace in Ghana, as the contagious effect suggested.

Prof. Agyeman-Duah stated that key threats to Ghana’s security remained elections and governance, stating that the country’s past as a coup-prone country appeared to be forgotten and it had become one of the few thriving democracies in Africa.

“Since the Fourth Republic emerged in 1993, that is, thirty years ago, Ghana has, relatively, been peaceful and stable.

“Clearly in Ghana, threats to national security are more internal than external. All governments, past and present, have pursued the policy of good neighbourliness, which has become a cornerstone in the country’s foreign policy in the sub-region; thus it is important to look at the issues that threaten the country’s internal security,” he stressed.