Do not glorify wealth from dubious sources - Togbe Afede 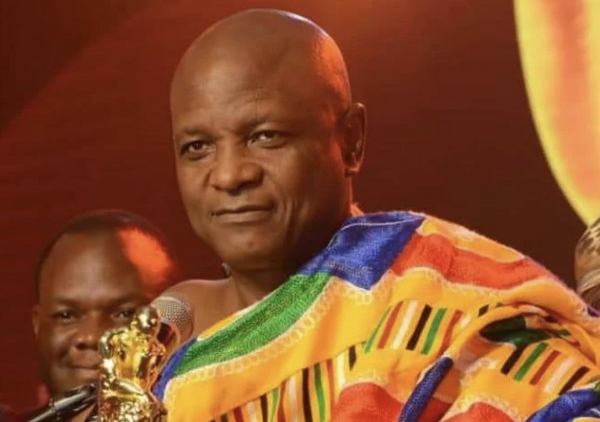 That, he said, would help significantly in the fight against corruption.

Speaking at an anti-corruption forum at the forecourt of the Asogli Palace at Ho-Bankoe as part of activities marking this year’s Te Za (Yam Festival) last Saturday, the Agbogbomefia said it was important for people to respect those who worked hard in dignity and not just because of a certain lifestyle.

Te Za, popularly known as the Asogli Yam Festival, is essentially a harvest festival celebrated by the Asogli State (Ho) and its surrounding areas, such as Sokode, Abutia Klefe and Akrofu.

The festival is celebrated in September every year to thank God and also the gods and ancestors for a bumper harvest and as an occasion to offer prayers for good health and prosperity.

This year, the festival is being held on the theme: “Let’s eschew, greed, unite for peace, development and prosperity”, and the forum was held to focus on that.
The forum also had investigative journalist, Manasseh Azure Awuni, and musician and anti-corruption campaigner, Black Rasta, speaking.

Togbe Afede said corruption was now the biggest bottleneck in the country’s path to development and the citizenry must never tolerate it for any reason but rather condemn it in no uncertain terms.

He said the masses were suffering beyond description because the government had failed to develop the necessary conditions for the people to participate equally in the development process.

That, he said, had in turn led to the failure of the nation to fulfil the dreams of the founding fathers of the country and the predictions of the 1992 Constitution for all Ghanaians to enjoy the national cake without bias.

The Agbogbomefia said depriving some Ghanaians development based on their tribal or political party affiliations was not a good recipe for peace and harmony in the country.

He also called on the Ghanaian youth to stop fighting among themselves and fight against corruption, as their future was at stake.

“Corruption is the main cause of underdevelopment in the country and this demands the attention of us all. We have to call the youth to be part of the fight against corruption as the country belongs to them.

“It is sad to see how students in the universities fight among themselves when there’s a bigger battle to fight. Fight the things that endanger your future,” he advised the youth.

He further entreated Ghanaians to eschew laziness and embrace hard work as a requirement for wealth creation.

The Agbogbomefia also used the occasion to clarify his decision to reject the ex-gratia paid to him as a member of the Council of State, emphasising that he would reject any ex-gratia again if the opportunity presented itself.

“I returned the ex-gratia amount I was given not because I didn’t need the money; in fact at that particular time, I needed money very badly to meet various family obligations. But I truly believe that money was not deserved.

“Yes, I will reject ex-gratia again if I have to because our country is a very poor country so anybody who sacrifices or who has offered to voluntarily work for this country must be very considerate,” he said.

Manasseh Awuni, in a presentation, said the culture of silence would not help in the fight against corruption.

He, therefore, called on Ghanaians to expose corrupt acts in the society promptly and without fear or favour.

“Let us rather look within ourselves and identify corrupt people among us and deal with them without delay,” he stressed.

Black Rasta also entreated Ghanaians to hold firmly onto the traditions and customs of their forebears, stick to the truth and fiercely fight corruption without compromise.

He intimated that in the past, there was no corruption in the communities because the culprits were swiftly dealt with by the deities.

Black Rasta said society was now fraught with corruption because most Ghanaians had lost the values of their ancestors to corrupt Western cultures.

He described as sad, the kind of leadership that was dominating the Ghanaian society with little consideration for the future generation to inherit.

“Our water bodies and forests are fast disappearing because of greed on the part of a few,” he added.

Black Rasta entreated members of the Council of State who benefitted from the ex gratia award to emulate the example of Togbe Afede and demonstrate their patriotism by returning the money to the state.

The Deputy Chief Executive of XYZ Broadcasting Limited, Eric Ahianyo, urged Ghanaians to preserve and be proud of their native languages, which were synonymous with their culture.

Ghana’s culture, he said, frowned on dishonesty and corruption and so cultural values must be adhered to in the fight against corruption, he maintained.

“Let us support our chiefs to boldly fight corruption and not become slaves to greedy politicians,” he said.

The Public Affairs Officer of the Private Newspapers and Publishers Association (PRINPAG), George Wilson Kingson, urged journalists to be bold and quick in naming and shaming corrupt politicians.

He called for a wholesale review of the country’s laws to curtail corruption.

“That also means the Office of the Special Prosecutor must be devoid of political interference,” Mr Kingston added.