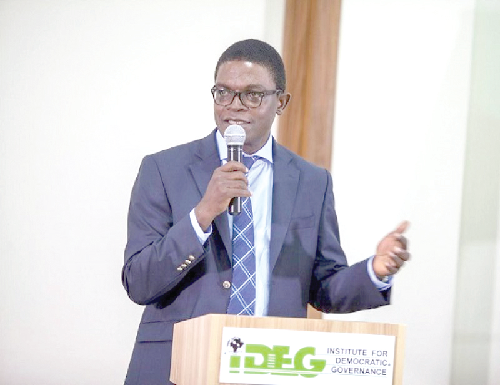 The Executive Director of the Institute for Democratic Governance (IDEG), Dr Emmanuel Akwetey, has called for a consultative forum to discuss the electoral reforms proposed by the National Democratic Congress (NDC).

He also called on the NDC to engage the New Patriotic Party (NPP) as consensus was required to reform the electoral system.

Describing the NDC proposals as constructive initiatives and commendable, he said although the NDC indicated it engaged stakeholders, it did not mention the NPP as one of the stakeholders.

In an interview with the Daily Graphic yesterday, Dr Akwetey said considering the fact that the two parties were the major players in Ghana’s electoral system, it was important that they engaged each other on such national matters.

He said the NDC had learnt its lessons from past elections, hence, its proposals, and “the good thing is that the party detached itself from the issues.

He said there should, therefore, be a channel of engagement with the NPP and the EC.

Dr Akwetey said the proposals raised by the NDC should not be tied with the EC as some of the issues raised were beyond the EC and the Inter-Party Advisory Committee (IPAC), hence, the proposal for the consultative forum.

He said similar forums were held in 2008 to address the issue of a bloated register and the Justice VCRAC Crabbe Committee in 2015 to address other challenges of Ghana’s electoral system.

Dr Akwetey conceded that there were the dynamics of relationships between the NDC and the EC which might affect the work between the two bodies.

He, however, said the two bodies needed to put aside such differences and work for the common good of the country.

He suggested that a team of eminent persons could be appointed by the EC to facilitate confidence-building and EC-NDC-NPP deliberations on how to resolve issues of mistrust and, thereby, strengthen cooperation in furtherance of electoral reforms and the integrity of elections in the current governance mandate period.