Democracy has been good for us, but how good? • Insights from the Afrobarometer survey 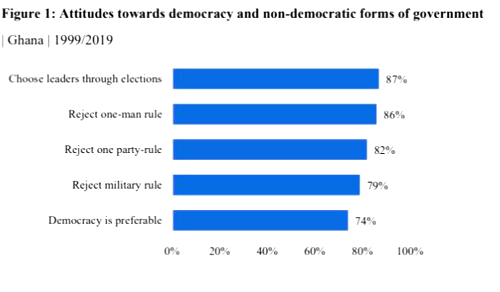 April 28, 2022, marked 30 years of the referendum approving the 1992 Constitution. Given the country’s post-independence political trajectory which includes two previously failed attempts at multiparty democracy, with each lasting no more than three years, it is quite remarkable what the 4th Republican Constitution has achieved. In his reflection, President Nana Addo Dankwa Akufo-Addo, among many things, boldly declared that “democracy has been good for us”.

In 1999, Giovanni Carbone penned the following: “In order to survive and consolidate over the long term, any new democratic regime will need to undergo (among other things) a process of gradual legitimisation. Legitimacy, in turn, can be acquired in two fundamental ways. The first is normative: People hold values and beliefs that assert democracy’s inherent superiority and value it “for its own sake”.

The second is performance-based: People come to accept democracy because it helps attain valued goals such as material well-being or social peace.

How good has democracy been for Ghana?

On Carbone’s argument that “people hold values and beliefs that assert democracy’s inherent superiority and value it for its own sake”, how does the verdict of Ghanaians measure up against this assertion?

On this dimension, the transition to democracy can be largely described as having produced the desired effect of bringing our values and beliefs into accepting democracy as being preferable to any other form. As I asserted in a recent reflection piece, we have made our peace with democracy and I am particularly impressed by the high percentage of Ghanaians who say that we must choose our leaders through elections, one of the key linchpins of democratic practice.

The 4th Republic has seen eight elections, and while two ended up in the Supreme Court for judicial adjudication because the outcome was disputed by the party declared as having lost, the preference for the use of elections as the mechanism for choosing leaders remains high.

The other dimension of Carbone’s argument is that, “People come to accept democracy because it helps attain valued goals such as material well-being or social peace.” This statement begs the question: How do Ghanaians evaluate the extent to which our democratic form of government has delivered on critical social and economic goods?

In the previous graph, I presented the average rating of the delivery of key social and economic goods over eight rounds of the Afrobarometer survey. In this graph, I show the extent to which the delivery of those goods has changed over time — positive or negative — over those eight rounds of the survey. The picture is mixed with both positive and negative changes over time.

In wrapping up his speech, President Akufo-Addo noted that there was still work to be done and cited the threats to our democracy as “chieftaincy conflicts, land disputes, ethnic conflicts, cyber security issues, youth unemployment, economic hardships and corruption in our public life". Indeed, the President has his pulse right on the challenges we face and as the Afrobarometer data shows, there is work to be done to ensure that democracy delivers critical social and economic goods at sustainable levels. It is also important to point out that the President ended on a note of optimism saying, “The basic commitment to resolving these challenges within the framework of due process and democratic institutions must remain unshaken.”

So in the next 30 years when we return to reflect on 60 years of the Constitution of the Fourth Republic, it is my ardent hope that we would have made more sustainable progress and further strengthened our resolve to continue on the path of democratic governance. More so, that we would have dealt satisfactorily with the challenges the President pointed out because as Carbone said in 1999, “gravely and consistently dismal results in the achievement of other goals (security, economic well-being or social equality) might overwhelm the will to remain loyal to the democratic model”.

NB: The writer is a Democracy and Governance (D&G) fellow at CDD-Ghana.