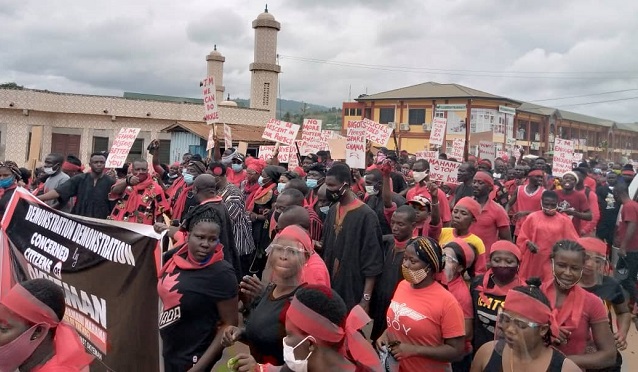 Natives of Akyem Abuakwa Traditional area are demonstrating against former President John Mahama for his "Akyem Sakawa Boys" comments in reference to the Agyapa Deal.

The demonstrating Akyem natives have described the comment as ethnocentric, just as President Nana Akufo-Addo also labelled it during his meeting last week with Catholic Bishops.

Over 500 natives of Akyem Abuakwa State clothed in red and black attires gathered at Asamankese Wednesday, to embark on the demonstration with some wielding placards bearing inscriptions such as "Mahama is shameless; Mahama stop these insults and JM enough is enough you are warned".

The demonstrators are demanding that the former President withdraws the alleged ethnocentric comments and apologise to the people of Akyem and Ghana in general.

The former President recently shared a post by Bolgatanga Central Constituency MP, Isaac Adongo title: "Agyapa Royalties Fraud Is The Last Straw: The Akyem Sakawa Boys and Grandpas Must Go" in which he described President Akufo-Addo's reign as one of family and friends and tagged them variously as "Akyem Mafia" and "Akyem Sakawa Boys."

Sakawa is a derogatory term commonly used in reference to internet fraudsters.

Read also: You cannot win the election with tribalism - Bawumia to Mahama

No campaign for the NDC in Akyem Abuakwa
In an interview with the Asamankesehene, Barima Kesse Bediako III, he said the National Democratic Congress (NDC) and the former President would be barred from holding any political campaigns in the Akyem Abuakwa Traditional area ahead of the December polls, should he fail to withdraw and apologise.

Some angry youth who also spoke with Graphic Online reiterated the chief’s resolve, and asked the former president not to set foot on Akyem land else they would chase him with stones.