Dealing with mistrust in electoral process 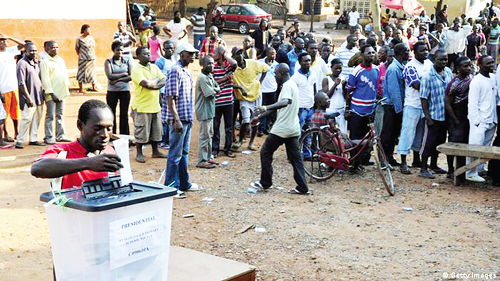 Voters waiting for their turn to cast their ballot

Having gone through eight elections after Ghana returned to democratic dispensation in 1992, many would have expected that as of this time, we should be heading towards a violent- free and peaceful elections.

This situation is not peculiar in our electoral environment but even in advanced democracies such as the United States of America (USA). Interestingly, even in the USA, the issue is not with security presence but the management of the process. But in all these, the laws deal with them appropriately.

But in our case, the heavy deployment of security personnel during elections often creates the impression that the party in power wants to remain in power and hence the deployment of high security presence at election centres.

As we speak, the security agencies have not helped the electorate as we have unresolved cases of violence from the voter registration process through the conduct of the polls. These give credence to the suspicion that political parties in power try to use state apparatus to help them stay in power.

Although this might be untrue, it goes to confirm that democracy is yet to be entrenched in our country. Otherwise, we would not be deploying security personnel to police our elections.

It is time for all stakeholders to support and trust the electoral management systems outlined by the EC to ensure successful elections. After all, the legendary Dr Kwadwo Afari-Gyan supervised the conduct of elections that resulted in the changeover of governments. Why can’t we have confidence in the systems put in place after Dr Afari-Gyan left office?

As political parties, it is imperative that we put the requisite structures and personnel in place to work for the good of the political parties and not place noise makers who refuse to act their part only to blame the EC for the non-performance of party officials.

Certainly, if political parties are able to appoint the right personnel in right offices, I believe that even before the EC declares the results, the parties would be calling the winning candidates to congratulate them and not wait to challenge the results declared by the EC. It will help reduce the propensity of electoral violence and tensions in constituencies and the nation as a whole.

With such a system in place, political parties that want to hold on to power at all cost will think twice. It is a fact that the phenomenon of wanting to hold on to power is a major reason for post-election violence which has led to political instability in some countries of the sub-region. Politicians and political parties must learn to accept results to avoid any form of crisis or violence. They must use the outcome of election results to prepare for the next elections as it is always better to let go of power than destroy the country.

All of us — ­ the EC, political parties, the media and security agencies —have a role to play in ensuring the peaceful and credible conduct of elections.

Communication from the electoral management body, the manner political parties conduct themselves and how the media relay information must be done effectively. When these critical bodies act appropriately, there would not be the need for the security agencies to show power nor will political parties establish vigilante groups to back their operations.

If we are able to undertake this simple task, Ghana will be considered one of the mature democratic countries. But if we keep depending on the security agencies for the purpose of ensuring a successful election, then our democracy is still at its infancy.

I think we have reached a point where we can hold elections without security presence and see elections as normal everyday activity.

This should begin from within the conduct of internal political party elections where there would be no intimidation or abuse of other candidates seeking positions in the parties. That is the beauty of democracy.