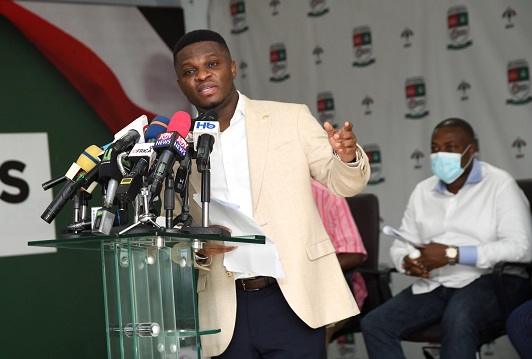 The National Communications Officer of the opposition National Democratic Congress, Sammy Gyamfi says nothing but the mismanagement and reckless spending of the government is all to blame for the country’s present economic woes.

Contrary to assertions by the government, he says the present economic situation of the country cannot be blamed on the Covid-19 pandemic.

Sammy Gyamfi was addressing a press conference in Accra to react to government’s decision to reverse benchmark discounts on selected imported products.

President Akufo-Addo during his Christmas Message to the nation asserted that the pandemic has affected every sector of the global economy and national life, visiting its ravages on virtually everything.

Read also: There are brighter days ahead for Ghana - President Akufo-Addo @ Christmas

“It is worthy to note that, several countries in the sub-region such as Togo, Benin, Nigeria, Ivory Coast, among others, have better budget deficit, debt to GDP ratio and other economic indices than Ghana despite being hit by the COVID pandemic. None of these countries has slapped their citizenry with the kind of draconian revenue measures the Ghanaian people are witnessing at the hands of the insensitive Akufo-Addo/Bawumia government. Therefore, COVID-19 can neither be a reasonable justification for the reversal of benchmark discounts on imported products nor the imposition of unprecedented hardships and misery on Ghanaians by this government.”

Sammy Gyamfi insisted that the “catastrophic decision” by government to remove the benchmark discounts on imported products “has been occasioned by the self-inflicted economic malice we find ourselves with our economy in tatters and government simply unable to find money to do anything.”

He accused the government of economic mismanagement and reckless election drive for the past five years.

"The Akufo-Addo, Bawumia NPP government has decided to punish the already burdened Ghanaian people with more hardship for their own recklessness and economic mismanagement. This is why all manner of crippling taxes and killer revenue measures such as the reversal of benchmark value discounts are being imposed on suffering Ghanaians to shore up government's revenue just to create an artificial picture of a sound economy in order to convince the investor community on more and more borrowing. So don't be deceived that this policy has been introduced because government wants to support AGI and local manufacturers, it is not true. The reason for the introduction of this draconian policy is revenue and nothing else. Government is broke."

Background
Government, through the Ghana Revenue Authority (GRA), announced that effective January 4, 2022, benchmark values on some 43 selected items would be reversed.

Government in 2019 introduced the benchmark policy in accordance with the World Customs Organisation’s policy of regular review of valuation database, bringing a sigh of relief to importers and the business community, that previously complained of exorbitant customs duties.