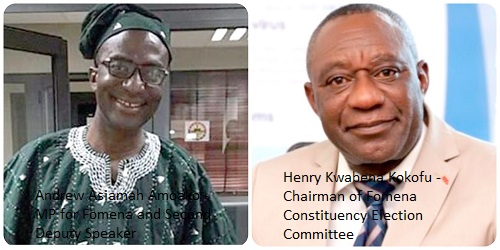 Tension is still high within the New Patriotic Party (NPP)in the Fomena constituency of the Ashanti Region.

This follows a decision by the party hierarchy to put on hold the constituency executive election until further notice.

The aggrieved party members in the constituency who are suspecting some foul play claimed the decision to put on hold the elections is to favour a certain group of persons.

Currently, the party has only held the polling stations executive elections and is yet to hold the electoral area coordinators election that will pave the way for the constituency election.

The Chairman of the Constituency Election Committee, Henry Kwabena Kokofu, said the elections were not an event but a process and “We are still going through the process and when the road is clear, we will hold the executive election”.

“We have just finished with the polling stations executive elections and would soon conduct that of the electoral area coordinators,” he stated.

However, some aggrieved party members in the constituency are accusing the party executives and the committee of manipulating the elections to favour the current Independent Member of Parliament (MP) for the area, Andrew Amoako Asiamah and pave the way for him to contest on the ticket of the NPP.

Mr Asiamah, who is also the Second Deputy Speaker of Parliament, until the 2020 election was the incumbent NPP MP for the Fomena Constituency but as a result of some differences between him and the party decided to go independent and won the election.

They claimed the party gave the nomination forms to only the supporters of the MP who deserted the party in the last elections.

However, Mr Kokofu rebutted the accusations claiming that the process was free and fair and those who refused to take part did so on their own volition.

“Those who decided to abstain from the election were within their rights. We can't force anyone to pick forms to stand for election if they are not ready,” he said.

Prior to the 2020 parliamentary elections, Mr Asiamah was sacked from Parliament for deciding to contest the seat as an independent candidate after winning it on the ticket of the NPP.

His decision was as a result of a conflict between him and the then constituency chairman, Kwasi Ntim, who many described as a the king maker in the party in the area.

The decision to go independent created bad blood between Mr Asiamah and the NPP leading to an acrimonious electioneering campaign.

Just like the proverbial rejected stone, he became the cornerstone that the party needed to have a majority in Parliament when both the NPP and the NDC won equal number of seats (137).

He then decided ‘to go back home’ to join forces with his mother party to have a majority in Parliament. This decision led to him being made the Second Deputy Speaker of Parliament.

Notwithstanding his support for the party in Parliament, his decision coupled with the seeming support he was receiving from the party, it did not go down well with some party supporters in the constituency.

They believed that his decision to go independent was an affront to the party and as such should not be given all the support he was receiving from the party.

The fear of the party supporters in the constituency was that the party was preparing the grounds for him to come back to contest on the ticket of the party in the next parliamentary elections.

A group of aggrieved party people in early March this year painted the party office in the constituency in the colours of the NDC with the posters of former President, John Dramani Mahama on it as a form of registering their displeasure at what they believed was an attempt by the party to circumvent the rules.

A member of the aggrieved persons and part of the Constituency Communication team, Emmanuel Dormah, told the Daily Graphic that the party was not being fair to those who stood by the party and helped the party to win the presidential elections. 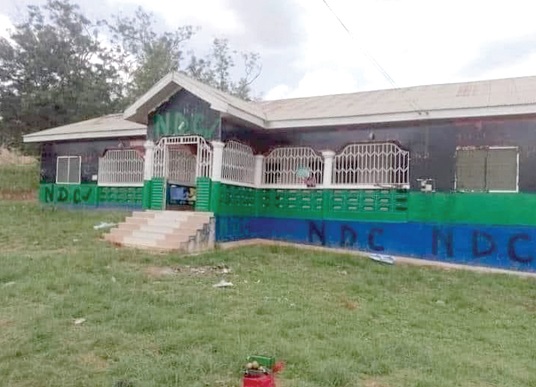 The rebranded NPP office by aggrieved members of the party

He said the party rules stated that “anyone who resigns from the party or is seen on another party’s campaign platform forfeits his membership and would have to reapply to be admitted into the party”.

Mr Dormah said “as far as they are concerned, no process has started yet and we do not accept the results of the supposed polling stations election. We are still waiting to hear from the national executives of the party”.

“What we are doing is to protect the interest of the party and ensure that no moles infiltrate our ranks,” he said.

During his recent visit to the Ashanti Region, the General Secretary of the party, John Boadu, hinted that the party might decide to retain the same constituency executive as it intended doing for Bawku area owing to the insecurity situation there.

However, he said nothing was assured yet and that discussions were ongoing.