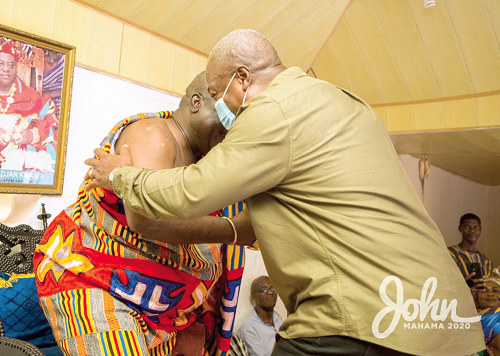 The Chief of Aburi, Otubour Gyan Kwasi II, has admonished the New Patriotic Party (NPP) and the National Democratic Congress (NDC) to conduct their campaigns devoid of insults, name calling and violence.

"If the December 7 general election is to be characterised by violence then it will largely depend on the NPP and the NDC because they are the two major political parties in the country,” he stated.

Otubour Gyan Kwasi, who is also the Adontehene of Okuapeman, gave the advice when the flag bearer of the NDC, Mr John Dramani Mahama, paid a courtesy call on him at his palace at Aburi at the beginning of his (Mahama) campaign tour of the Eastern Region last Thursday.

On the first day of the campaign tour, Mr Mahama addressed the chiefs and people of Adawso, Asesewa,  Sekesua, Akateng in the Akuapem North, Okere and Upper Manya Krobo.

He advised the two major political parties to work hard to ensure that the December 7 polls was peaceful and incident-free before, during and after the election.

Addressing the chiefs and people of the areas he visited, Mr Mahama acknowledged the positive development in the management of the economy during the NDC's regime which he described as better than the current NPP administration.

He also accused the NPP government of abandoning projects such as CHIPS compound, clinics, classroom blocks and roads started by the NDC administration.

On December 7 election, Mr Mahama, therefore, asked the chiefs and people to vote massively for him and the party's parliamentary candidates.

He said if the NDC recaptured power in the 2020 election, he would ensure that all projects initiated during the NDC administration would be continued to improve the socio-economic well-being of the people.

Mr Mahama explained that Ghanaians were witnesses to the fact that the NDC administration had done absolutely well in the area of infrastructure and also improving the living conditions of the people in the communities across the region and the country as a whole.

Mr Mahama used the occasion to introduce Mr Justice Klotey Amassah and Bismark Tetteh Nyarko as the party's parliamentary candidates for Akuapem North and Upper Manya Krobo respectively and urged the party supporters to vote for them at the elections.