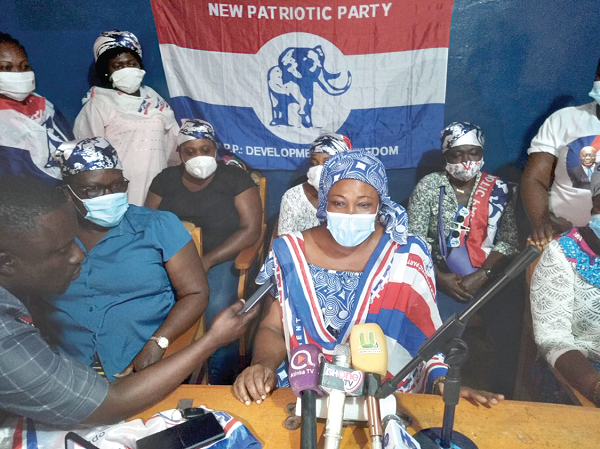 The Women’s Wing of the ruling New Patriotic Party (NPP) in the Agona West Constituency has lauded President Nana Addo Dankwa Akufo-Addo for the appointment of Mrs Justina Marigold Assan as the Minister-designate for the Central Region.

According to them, the elevation of Mrs Assan, the Municipal Chief Executive for Agona West, to the high office of Minister-designate was a great honour to the constituency and women across the nation.

Addressing a press conference at Agona Swedru last Tuesday to thank the President for Mrs Assan’s appointment, a polling station women organiser, Ms Barikisu Abdulai, said President Akufo-Addo made the right choice and that Mrs Assan was very competent to occupy her new office if approved by Parliament.

She indicated that Mrs Assan distinguished herself for the past four years after her appointment as the MCE for Agona West, saying, “indeed Mrs Assan’s sterling performance as MCE catapulted her to win the heart of President Akufo-Addo, leading to her new portfolio”.

“Our MCE performed creditably and we do not have any doubt whatsoever that she would work hard towards the transformation of the Central Region to better the lot of the ordinary people,” she said.

She stated that the people of Agona West were fortunate in the first term of President Akufo-Addo when the MP for the area, Mrs Cynthia Morrison, was appointed the Minister of Gender, Children and Social Protection.

“Thankfully, in the President’s second term, Agona West again has found favour in the eyes of the President through the appointment of Mrs Assan as the minister-designate for Central Region,” she said.

According to her, the people of Agona West were grateful to the President for the appointment of Mrs Assan as the first woman to occupy the position on the ticket of the NPP since the promulgation of the Fourth Republican democracy.

“We pledge our unflinching support to her since her success will open the window of opportunities for other capable women in the future to take up similar positions,” Ms Abdulai stated.

For her part, the Agona West Constituency Women Organiser, Ms Betty Nyantekyiwaa Kwaako, described Mrs Assan as a competent woman with the required competence to effectively and efficiently run the affairs of the region.

She added that Mrs Assan’s appointment was a great honour to the constituency and that she would discharge her duties, if approved, diligently towards improving the living conditions of the people in the region.